The newest models of HDHomeRun Connect are remarkably useful for delivering free live TV all over your home.

It doesn’t matter if you want to watch live or recorded TV on your smartphone, large screen television, PC or tablet.

Being able to watch or record up to four TV shows at once is a feature cable companies often brag about. And they charge you quite a bit every month to do it on their equipment. If you’re a Spectrum cable subscriber, you can record only two shows at once for every DVR receiver you rent from them. With Xfinity X1, you record up to six shows at once, but have fun paying that triple digit bill every month.

Buy a TV antenna and you can get channels like NBC, CBS, ABC, FOX and PBS in HD for a fraction of the price. The picture will very likely look much better than what the local cable provider has been delivering because your picture isn’t being compressed anymore.

If you also want live premium channels like A&E or AMC, there are many live streaming options for cord cutters.

I’ve been using the HDHomeRun Connect Quatro with software-hub Plex, and a NVIDIA Shield Pro

as a media server.

During my tests, I was recording a few shows simultaneously and watching them later through Plex. Watching an episode of The X-Files came across smooth, and without any pixelation.

The recordings are saved in MPEG4 format, which takes up more hard drive space. But the picture quality — whether it was 720p or 1080i – was very crisp.

The Shield Pro’s 500GB hard drive gave me enough space for everything I wanted to record. I live in what I consider an antenna-rich landscape because I generally get about 44 channels from my antenna, including PBS, NBC, ABC, CBS and FOX.

that I’ve been using over the last year is a dual tuner, so you can watch and record up to two shows at once. The Extend has a metal, griddle shaped frame that works as a heat sink, and runs about as warm as a laptop.

It has built-in transcoding to h.264 format, which gives you a smaller file size per recording. But as more hardware and software companies include transcoding, the need for the Extend is becoming less necessary.

During my month of testing, I used all four tuners at once with a variety of devices around the house. I used the HDHomeRun app on an Amazon Fire TV

(3rd generation). The Fire TV is connected to a television located in a back bedroom and streaming my OTA channels over WiFi. While that TV was running, I fired up HDHomeRun apps on my Samsung Galaxy S5, my ASUS laptop and 10 year old HP desktop. I switched from the computers to two other televisions in my homes.

No matter what combination of smartphones, computers or TVs I used, running four tuners at once was as smooth as a single tuner. The picture quality looked as crisp as using the indoor antennas that I have set up around my home. Recording a show while the other three tuners were operating posed no challenge for the Quatro either.

The Connect Quatro got only slightly warmer when all four tuners were going, but remained noticeably cooler to the touch than the Extend.  The Quatro is a very dependable, well-built tuner.

Choosing a DVR platform for HDHomeRun

You don’t need to use the same setup that I do to get a lot out of the one-two punch of an antenna with a TV tuner. HDHomeRun tuners are made so that you can mix and match your hard drive storage options and devices that you use to watch TV. Before getting my Shield Pro, I rolled my own hard drive with a Rosewill hard drive enclosure

and connected it to my 10 year old HP PC that I usually leave powered on. You can setup a mini-PC or a dedicated WP MyCloud Drive or NAS for storage.

There are some clear advantages to using some DVR platforms over others. Plex is pretty simple to use and recently began experimenting with a feature that lets you remove commercials.

Emby is feature-rich, but can run up your costs for hardware if you don’t already have it.

The streaming device connected to your television will likely dictate what kind of channel guide and DVR platform. Here are some options.

Setting up a HDHomeRun is pretty simple. Plug your TV antenna into the back of the HDHomeRun tuner, and connect an Ethernet cable from the tuner to a wireless router. Run a channel scan at myhdhomerun.com and your channels will pop up.

Download HDHomeRun apps to your devices, whether it’s a Roku or iPad. Now start watching TV. A HDHomeRun tuner can be super useful even if you have no intention of recording OTA channels pulled in from your antenna.

Example: My daughter is watching Sesame Street on the living room TV, and I need to catch up on some local news. I pull out my Samsung Galaxy S5, and start watching whatever I want on the HDHomeRun app. She’s not pulled away from Elmo, and I can quickly watch what I need to. After I’m done, I can do a little channel surfing from the couch while keeping an eye on her.

Let’s add to that: My wife is in a nearby bedroom with a TV on “for background”, as she likes to say. With all that going on, I still have another free tuner in case I wanted to record a show that was coming on. I use Plex to record shows and watch my recorded content, but when I want to quickly catch a little TV, I use my HDHomeRun app. It’s faster for watching live TV on a smartphone. And the sidebar channel menu on the right side of the screen lets me scroll through available programs without having to stop what I’m watching. 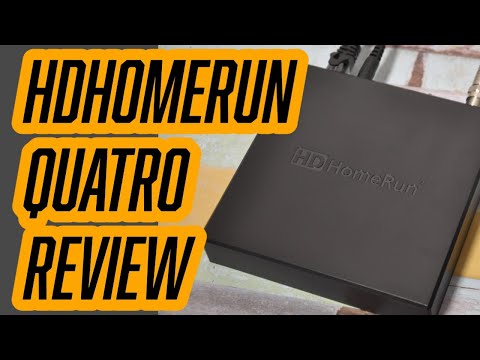 Plenty of folks like to buy an OTA DVR that they just plug in and start using right away. A TiVo Roamio OTA is one of the best plug-and-play solutions out there. There’s no subscription required for channel guide data. You can easily skip through commercials. And there’s popular streaming apps like Netflix alongside your OTA channels. The Roamio comes with a 1TB hard drive. But it’s not cheap.

is almost like that except that you need to buy an external hard drive for storage. The Tablo Dual comes with a 64G internal hard drive, but critics say that’s not enough space to store a large collection of HD recordings.

Channel Master is about to release its Stream+ device, an OTA DVR that operates on Android TV, and uses an SD card to store recordings. The Stream+ is also expected to offer some gaming options already available on Android TV devices. SiliconDust will debut its first tuner with a built-in 250GB hard drive called the Connect Duo+ later this year. Pricing and a release date have not yet been made public.

So there are a lot of options out there. And I hope review some of the newer DVR options in the months ahead.

One criticism of HDHomeRun tuners has been that you need a wired connection from your tuner to the wireless router. Last time I checked, Ethernet cords come in all different lengths. So I’ve never found this to be a valid knock. I’d much rather throw a few dollars to Monoprice once for some extra cord than pay a couple thousand bucks to a cable provider every year. The Connect Quatro is an ideal way to get live OTA TV to multiple TVs or tablets and smartphones.

You can find the HDHomeRun Connect Quatro at Newegg. The Connect Duo is available at Amazon.

Have you used a HDHomeRun Connect or another one of their tuners? What did you use for your DVR setup? Tell fellow readers in the comments below.