Philo is the cheapest way to live stream History channel, all three Hallmark channels and HGTV to your TV or smartphone.

It comes with unlimited Cloud DVR, a huge on-demand library of movies and TV shows and HD picture resolution.

In this review, I’m going to show you all the channels Philo offers, how the menus work on a few different streaming devices, and how it stacks up against a couple of low-cost streaming services. I’ve been a subscriber to Philo since December 2017, so this hands-on review is based on my two-plus years as a paying Philo TV subscriber.

If you want to quickly cut the cord from a pricey cable TV subscription, and you don’t need sports or local channels, Philo is a hard deal to beat at $20 per month. You can sign up for a free 7-day trial in less than a minute by using your mobile number. 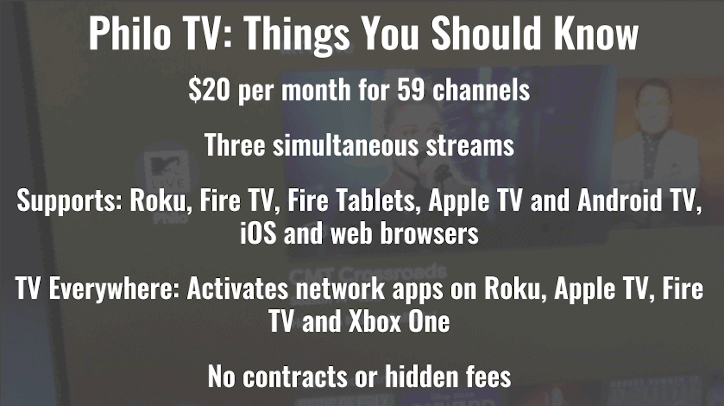 Philo started out with two slightly different channel packages, but now it just has one.

You get 59 live TV channels with unlimited Cloud DVR, and up to three simultaneous streams at once. A Philo TV channel bundle gives you access to some of the most popular shows on television. You can watch the latest seasons of: The Walking Dead on AMC, Fixer Upper on HGTV, Live PD on A&E, Alone on History channel and Yellowstone on Paramount Network.

And you have channels such as Discovery, a few MTV channels, VH1, all three Hallmark channels.

You can watch these shows live, or on-demand just like with a cable TV subscription.

Being able to stream three different channels at once is pretty handy if you have multiple TVs in a home or if you want to watch something different on a tablet or smartphone while the TV is on in the other room.

You can create up to 10 profiles on a Philo account, so people in your house can have their own sign-in credentials, their own saved shows and viewing history.

No sports, no locals

Flexibility is also a big perk with Philo. Cancel whenever you want by accessing your account online. There are no contracts and no sneaky, hidden fees like you get with a cable TV subscription.

Philo live streams its channels in high definition resolution, but there is a slight difference in picture quality depending on how you watch.

If you watch live TV, Philo streams in 720p. But if you watch those same programs on-demand, then the picture resolution is higher at 1080p. Most people aren’t going to notice the difference between HD resolutions of 720p and 1080p. But it’s worth mentioning if you are a real stickler for HD resolution.

Audio is in standard 2.0 stereo quality.

The real takeaway is that you don’t need a crazy, fast Internet connection to get HD picture quality. Philo recommends 13Mbps download speed to live stream in HD.

But you could go as low as 3Mbps for standard definition. So, even if you were on a budget and paying for a very minimal internet connection, you could still live stream Philo without a problem.

If you’re already subscribing to Netflix or Hulu, chances are you have a streaming device like a Roku or Fire Stick that supports Philo.

Philo Menu: How it works

The Philo app is pretty much the same across all streaming devices with a few minor exceptions.

The channel guide is a grid-style menu that adds a little bit more of a description than one you’ll see on a cable-TV or satellite TV service.

The Home tab keeps track of shows and movies that you didn’t finish watching. That’s pretty handy if you watched half of a movie, and want to pick up where you left off the next day.

Am I the only person who does that? 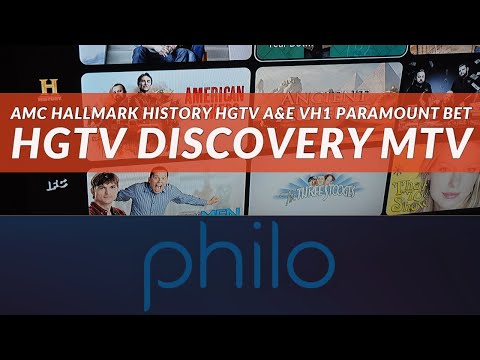 Under the “Keep Watching” section, you can see your saved/recorded shows, what’s trending on live TV, recommendations, top shows on Philo and what’s new and upcoming.

Cloud DVR is straightforward, and comes at no extra cost. Recordings will only be available for 30 days. And just about anything that’s aired in the last few days is likely available on-demand.

That makes Philo a pretty good catch-all for whatever is airing on live TV in a given week.

I’ve been happy with how easy it has been to record shows. I can just click on an upcoming show’s thumbnail, and get the entire season that’s available. I don’t have to think too deeply about it, which is the best system you can have.

One of the newest features on the Philo app is the “Top” section.

You can scroll through your channels and find the most popular shows that are currently airing. This isn’t a feature that I use too often, but I’m glad to have it just the same because it can help with discovering new shows that you might not be aware of under the more traditional looking guide.

Aside from live TV, Philo users can activate 34 apps for channels such as A&E, AMC and Animal Planet on streaming devices, smartphones and computers.

These are called TV Everywhere apps and often have extra live streams, movies and shows. You can look over the list of devices that will accept TV Everywhere credentials.

Philo offers a lot of nice perks for a live TV package for $20 per month. But it’s not the only cheap option for watching shows from A&E or BET or History channel.

Hulu on-demand is really cheap at $5.99 per month,, and it does have some TV shows that you’ll find on Philo. But after doing some digging and side-by-side comparisons, it’s not as simple as picking one service over another.

So here’s the deal.

There are about 22 of the same networks on Hulu and Philo. Here’s the list I put together: But it takes a little while for a whole season of a show from A&E or History to appear on Hulu.

So for a show like “60 Days In” on A&E, Season 1 through 5 is currently on Hulu. If you want to see the latest season “60 Days In”, you’ll need either cable TV or a live TV streaming service like Philo.

Network TV shows on NBC, FOX and ABC show new episodes on Hulu the day after airing on live TV. Hulu also has an excellent lineup of original shows — “The Handmaid’s Tale” and newer gems such as “Little Fires Everywhere” that are getting plenty of attention.

And now, Hulu has become the hub for all new episodes of shows from FX. So if you want to see a new episode of American Horror Story, then you don’t really need a live TV subscription.

For live TV on the cheap, I recommend trying out Philo.

If you don’t need the newest episodes of everything, then pick up a dirt-cheap Hulu subscription.

You might also want to consider getting Philo and Hulu if you wanted to get the latest episodes from FX and broadcast networks such as CBS or ABC. You’re talking about $26 a month versus whatever your huge cable or satellite bill is right now.  Hulu has a free 7-day trial. Sling TV now costs $30 per month for one of its base channel packages. That’s 10 dollars more a month than Philo.

Sling TV used to be the cheapest game in town until Philo came along.

Be aware that Sling TV has two different channel base channel packages. And sports networks are not one just one main bundle.

So for sports fans, people who definitely need channels like ESPN or NBC Sports, Sling TV is going to be a better deal.

Take a look at the channel lineup for SlingTV, or sign up for a 7-day free trial. You can also prepay for a two or three month subscription under the Sling TV deals page, where you can get a free streaming device or other hardware.

Is Philo TV worth it?

I’ve been happy as a paying customer of Philo. It’s been just the right amount of pay-TV for me because I already have so much else to watch.

Philo won’t be for everyone. But if you’re not a big sports fan, or have other ways to watch baseball or basketball, then Philo might be the perfect fit in your cord cutting wheelhouse.

A lot of people want some kind of a la carte option. Television providers will probably never be able to do that and make a profit. But streaming services are beginning to recognize that smaller bundles are a perfect fit for a segment of TV watchers.

Since Philo offers a free 7-day trial, you can see how it works while you still have your cable TV or satellite subscription.

An Amazon Fire TV is one of my favorite ways to watch Philo because you can pull together an a la carte style menu from a few different sources.

The Fire TV channel guide lets you see all your Philo channels alongside over-the-air channels from a TV antenna, free services like Pluto TV and Amazon Channels like HBO.

And how much am I paying? That’s right — $20 per month. I’m not missing the local weather on NBC, or any national sports on FOX.

To recreate my channel lineup here, you will need to buy a TV antenna, and a Fire TV Recast. You are dishing out some more cash for the Fire TV Recast.

Let’s say you’re not interested in all that. You can still use the Philo app on Fire TV on its own. Fire TV devices also have a “Live TV” section within the main menu.

The NVIDIA Shield lets you add Philo channels right on the main menu.

The Shield runs on Android TV, which you can also find on certain Smart TVs, Mi Box and even the Nebula Capsule II portable projector. With the Shield TV, you can go to the customize channels button at the bottom of the screen, and add a feed for a single Philo channel.

In my case, I added A&E, AXS TV and History. Click on the channel icon, and you will go to the live channel. To the right, there are a number of popular on-demand shows and movies — depending on the channel.

The Philo app can be launched directly from the main menu — just like any number of streaming devices. But if you add a channel to the home screen, then you can dive directly into a live stream of a particular network or peruse on-demand shows and movies without having to go into the Philo app.

So now that I’ve given you a rundown of Philo, tell me what you think about the service in the comments below. What channels are you looking for the most?

**Note: This review was originally posted April 3, 2018 and has been updated.