The BenQ TK800M delivers one of the best and brightest 4K HDR resolutions for its price.

But the thing that really makes this DLP projector appealing is that it delivers a bright, beautiful HDR picture and doesn’t require fiddling with color accuracy and brightness.

You don’t need to be a techie, or home theater geek to get a great looking picture. Any sports fanatic, casual TV watcher or fan of outdoor movie nights should consider the TK800M for its performance and ease of use.

Even if you are someone who prefers to tinker, adjusting brightness, contrast, temperature and HDR brightness is pretty simple. And you can save your preferred settings. (BenQ says the TK800M’s color gamut is 96 percent Rec. 709.)

The TK800M has wide versatility with 4K streaming devices. When you connect a Roku or Fire TV that supports 4K HDR, the TK800M automatically optimizes settings.

The BenQ TK800M came out in 2019 and is a follow-up to the popular 2017 projector called the TK800. The TK800M is also referred to as the as a 4K Sports Projector by BenQ. There are preset picture modes called “Football mode” and “Sports Mode” for live sports.

You can find movies, original series and even live college football, NFL and MLB games in Ultra HD.

Amazon Prime members get 4K HDR programming as part of their subscription. Netflix offers 4K HDR with its top-tier subscription. fuboTV has select live sports in 4K HDR, and hinted that they’ll be expanding.

The new Disney+ will be offering its catalog — or at least some of it — in 4K HDR for those who have the compatible hardware to enjoy it. And in the not-too-distant future, free over-the-air TV will be capable of delivering 4K broadcasts.

On a 65-inch TV screen, 4K HDR looks impressive. When you watch an NFL or college football game on a 120 or 150 inch screen, it’s an immersive experience.

The projector has 3,000 lumens, and delivers a super bright picture with 8.3 million pixels on a screen that can go from 60 inches to 200 inches. 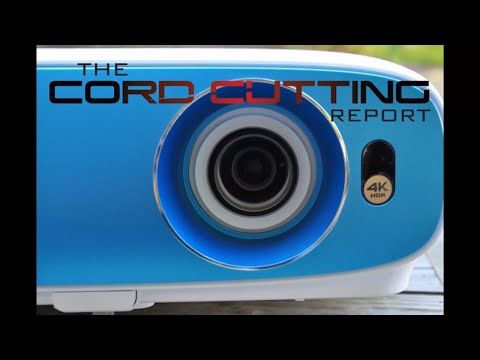 How I tested this projector

BenQ loaned me the TK800M for six weeks of testing. I did most of my viewing outdoors, watching live sports, movies and shows that are offered in 4K. An OWLENZ screen

was set up on my back deck for those sessions of TV and movie watching.

A couple of the movies and live TV shows were only in Full HD (1080p). I used white wall space in my condo for the rest of the testing. Netflix, Amazon Prime Video, fuboTV, YouTube TV, The Criterion Channel and Hulu were among the streaming platforms that were used.

This review is aimed at people who are new to projectors and are looking for a model that doesn’t require a lot of technical know-how, so you can quickly set-up and enjoy watching something on it.

My throw distance for most of my outdoor testing was roughly 11 feet away from the screen while on the deck. So my screen size was roughly 100 inches after some minor adjustments for picture clarity.

Indoors, I had more wall space to work with so I had viewing sessions where the screen size was roughly 120 inches and 150 inches. I also went much smaller.

If you’re dealing with a smaller room, the BenQ can still give you a decent sized screen. At just under seven feet, you can project a 60 inch screen. BenQ says the TK800 can project up to a 200 inch screen, but I didn’t have any surface large or flat enough to actually try it.

One of the things that impressed me right away was how quickly I could get the projector set up and running.

The TK800M has a 16:9 picture, and to get it just right, you can adjust the image size and clarity quickly with two rings at the top of the lens. There is a button on the remote to assist with keystone correction that’s pretty intuitive — even for a novice or beginner.

A rubber foot at the front of the projector can be raised or lowered with the push of a button. The two rear rubber feet screw up or down. At the back of the projector, there are two HDMI ports (including a HDMI 2.0 for 4K devices). There are inputs for RGB (or PC), audio and USB (Type-A) for a power supply.

How to Stream in 4K HDR: Roku vs Fire TV

The best streaming device to use with a TK800M is a Roku Streaming Stick+. It’s palm sized, plugs into the HDMI1 port and comes with a built-in WiFi antenna.

To power the Roku, you can just use the USB port on the projector, so you don’t need to run an extra cord anywhere. It’s the easiest way to tap into any streaming apps that support 4K HDR, including Netflix, Amazon Prime and fuboTV.

I also tried out a Fire TV Cube, which also supports 4K HDR. The one advantage of connecting a Fire TV Cube to the TK800M is you’re able to add some voice commands to the mix. Unfortunately, Amazon doesn’t support powering the projector on and off — even when you try to have the projector recognized as a TV.

I was able to search for something to watch, and even flipped through some over-the-air channels being pulled in by a connected Fire TV Recast. With the Fire TV devices, you can change TV channels and search for movies or shows using your voice.

The TK800M produces a stunning picture, and throws a lot of light in the process.

To give you an idea of what I’m talking about: In the pitch black of my back yard, the TK800M created a muted glow as if there were a full moon. But this light doesn’t come at the expense of picture quality.

A darkened room is the best way to appreciate the wide array of colors and 4K resolution. But the picture is bright and exceptional in a slightly dim room.

I watched a college football game in 4K on FS1 using a fuboTV subscription. This was an afternoon game. The projector was set up in my office, which has very thin see-through shades.

The TK800M maintains a very bright picture in a dimly lit room. The picture quality is greater than what I’ve seen with home theater projectors set up at sports bars.

There are presets under Picture Mode that might suit you fine. The Vivid TV and Football modes were the ones that had the best color and contrast.

Sports and Football modes are designed to enhance skin tones while balancing colors for fast-paced sports. Cinema and Sport looked to have just a little bit too much white at times depending on what I was watching.

With an episode of “Black Mirror” in 4K HDR, there was a lot of dark scenery, yet I could make out some incredible minute details when the camera panned through a darkened room, or jumped to a close up an actor’s face.

When I watched an older movie — “The Long Good Friday”  — in 1080p, the picture resolution appeared significantly greater than a large screen TV.  Every nook of Bob Hoskins face winced when he learned that his day of unpleasant news was getting worse.

After a couple more movies, and a few football games, going back to a television is kind of tough. That’s especially true when you start watching a football game. On a bigger screen, you see a lot more of the field — what kind of faces the players are making, and what other people are doing around them.

The color and detail from this projector is theater-grade quality. And watching fast-paced sports is a solid experience with impressive brightness.

There’s no doubt that the BenQ TK800M is among the best home theater projectors that you can also take outdoors for a movie night. Priced at about $1,200, it’s also one of the best priced around. If $1,200 is still too much for your budget, then the BenQ TK800 is worth considering. As you can see below the differences between the two models are going to be subtle for most people.

I wish the internal speaker was slightly better. The 5W internal speaker does pretty well, and can sometimes sound louder than you’d expect, depending on the size of the room that you’re watching in. But Anker released the Nebula Capsule II — which I reviewed this summer. It comes with an 8W speaker that has a fuller and richer sound.

This isn’t a deal breaker by any means because you can easily add a Bluetooth speaker for an outdoor movie night or even an inexpensive soundbar or speaker system to get full theater quality.

Got a question about something I missed? You can look over more specs on the BenQ TK800M at the BenQ website, or see it on Amazon.

Do you have a BenQ TK800M? What’s your favorite projector? Tell fellow readers what you think in the comments below. For more hardware reviews, head over to the main page of The Cord Cutting Report.