Soundcore Wakey: An alarm clock doesn’t need to be “smart”

But using the wireless charger on top of the Soundcore Wakey definitely beats trying to find your USB cord in the dark when you’re in bed and just finished watching something on Netflix.

Calling the Wakey the Swiss Army Knife of alarm clocks may be a little cheesy, but true. The number of handy features it adds are ones you actually want, and will use in your everyday grind.

Among them: two USB ports, an auxiliary media port, speakerphone and a Bluetooth speaker powered by dual 5W drivers — that to my ear — rivals an Amazon Echo or Google Home. 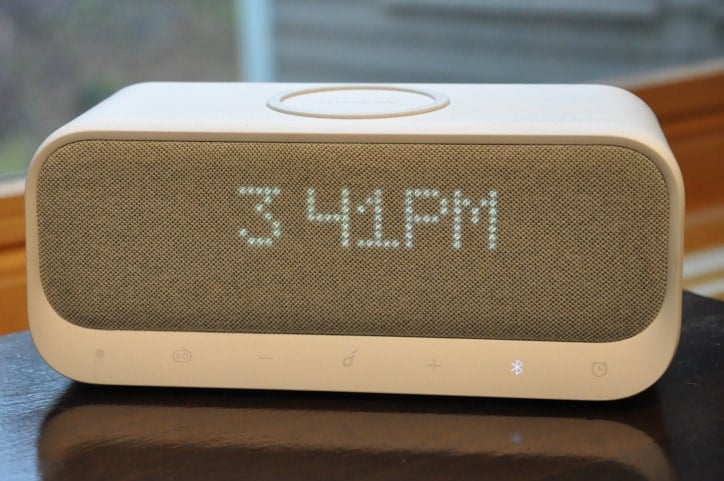 The fast-wireless charger is 10W for compatible Samsung smartphones, 5W for iPhones and very convenient compared to the nightly ritual of cord hunting.

My wife’s iPhone 8 Plus charged up very quickly on the Wakey — in about 2 ½ hours when the batter was below 30 percent. But I think your mileage will vary depending on which smartphone is your daily driver.

I was impressed that you don’t even need to line up the phone perfectly for the charger to work. Imagine watching Netflix in the dark when you’re in bed, and just putting the phone down on top of the clock.

As long as you see the blue light on in the front — you’re good to go. Time to sleep. The Bluetooth speaker is just awesome, especially considering its compact size. And it’s really the heart of the alarm clock because it can be used in a number of ways.

Pair it with your smartphone or tablet, and start listening to Spotify, Amazon Music or any other streaming service out there.

There’s the FM radio or you can turn the clock into a speakerphone by pressing the multi-function button in the front center of the phone. (More on that later.)

The speaker system is powered by dual 5W drivers, and I even noticed what looks like a bass reflex port on the back that really adds some nice sound. It reminded me of another Soundcore product I reviewed —- The Soundcore Infini Pro soundbar, which has a bass reflex ports each side.

What else needs charging?

Having two USB ports on the back of your alarm clock is way more useful that I could have imagined.

If you have a smart watch, a baby monitor, maybe you need to recharge your wireless headphones, you can keep all of these things handy, charged up and ready to go when you wake up. 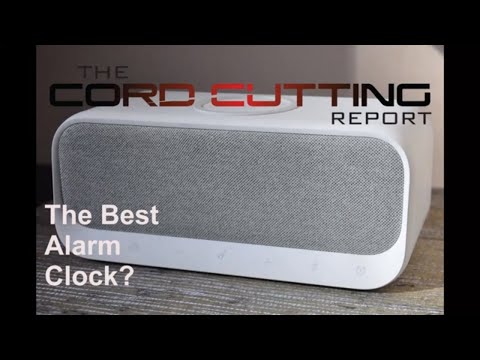 There are buttons on the front of the clock for features like the radio, volume control, the alarm and snooze.

The multi-function button at the center of the clock controls speakerphone functions such as answering or rejecting a phone call. But all of the clock’s features — from alarms to setting favorite radio stations — can be controlled through the Soundcore app.

Is it dim enough?

I definitely need a dark room for sleeping, and that means like blackout shades for me.

When I put the clock on the dimmest setting, I was fine. Within the Soundcore app, you can adjust the brightness, set the display to auto brightness or shut it off entirely. You can also set a time for when the LED display will go out and come back on using “Night Mode”.

Wake up the display just by touching a button on the front of the clock.

There are two ways to control the FM radio. You can tap the FM button to turn the radio on and off, and long press the plus or minus buttons on the front.

Within the Soundcore app, you can preset up to 10 radio stations. Just make sure you plug in that FM antenna in the back before you fire up the radio.

You have the option to wake up either to an alarm or an FM radio station. Waking up to a favorite song Spotify or another music streaming service is not supported.

To set an alarm, use the dial to set what time you want to wake up. You can also adjust the length of your snooze time. There’s 10 alarm sounds, and by and large, they’re pleasant to hear. And if for some reason you need multiple alarms, you can set up to 15 of them — and even customize them for certain days of the week.

The Wakey takes a soundboard mixer approach so if you want some wind with your crickets — you got it.

I have to say I wasn’t crazy about some of the white noise options. A ticking clock drives me crazy. I’m probably just being critical here because my favorite white noise sound — a window fan — apparently didn’t make the cut.

(The window fan is my jam — are you hearing me Anker? Window fan — Maybe in a software update? What do you think?)

When your phone is connected with Bluetooth, you can actually answer calls by pressing the multi-function button at the center of the phone. The speakerphone function lets you answer, end and reject incoming calls. But you’ll probably want to download the instruction manual ahead of time, so you don’t hang up on someone you’ve been wanting to talk to.

I don’t use speaker phone a lot, but I can see how this feature would be extremely useful if you were in a bedroom folding laundry while talking to someone on the phone for a while. It beats having an earbud stuck in your ears — prohibiting you from hearing other things (or people) in the house. 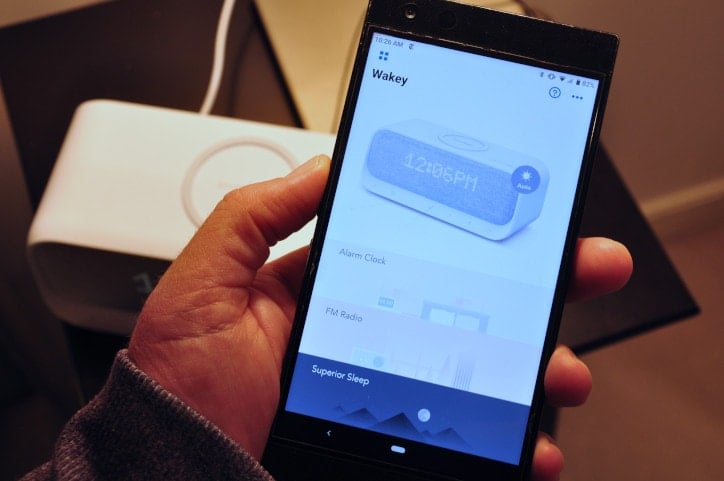 Setting this clock up out of the box is super easy, and it’s probably the best setup process I’ve seen with a quasi-smart clock. Download the Soundcore app, and as soon as you establish a Bluetooth connection, the correct time automatically syncs from your phone.

So no more pushing those “hour” or “minute” buttons to get the exact time right like your playing an arcade game from the 1980s.

The shell of the clock comes in either white or black and feels … well, it feels kind of rubbery and smooth at the same time. It’s actually made of plastic. The cloth grill adds a nice touch to the design. And the buttons on the bottom are flush with the bottom edge.

There are a couple of cons with this clock. The battery lasts for 90 minutes, so there’s no backup you can rely on if your power goes out longer than that while you’re sleeping. You also can’t wake up to you favorite song on Spotify or anything like that, which isn’t a huge deal for me, but it’s worth repeating.

Is the Soundcore Wakey worth it?

So Anker basically designed this alarm clock as sort-of an all purpose go-to to help you get to sleep with the white noise feature, and added a lot perks like the wireless phone charger, USB ports to charge up other devices and a Bluetooth speaker with some serious chops.

The Wakey is being sold for $99 on Amazon, which is an OK price considering a decent Bluetooth speaker alone might cost you close to that. You can also purchase the Wakey directly from the Soundcore store and get free shipping with any order over $28.

In an age of smart speakers with always-listening microphones, the Soundcore Wakey demonstrates you don’t need every device connected to the Internet to be remarkably useful.

I was reading that some people are going back to old school alarm clocks as a way to keep off their smartphone at night right before bed. I’m not sure how an older clock would help. I think just putting your phone down — like say on a wireless charger — would do the trick.

So what do you think of the Soundcore Wakey? Let me know in the comments below…