How to watch live news for coronavirus updates

Now that the coronavirus disease (COVID19) is spreading across the U.S., here is a rundown of options to watch or live stream local and national news.

I’m going to cover how to stay updated with local CBS, NBC, ABC and FOX stations, free live streaming apps and how to watch CNN, FOX News, MSNBC without a cable or TV subscription.

Local newscasts on NBC, CBS, ABC and FOX stations are key for finding out what’s happening in your city or town. Local news stations will have updates for school closings, postponements and resources that are nearby.

Most people in the U.S. — from Florida to California — can use a TV antenna to get local channels.

An indoor TV antenna is the easiest kind of setup, and should work well if you live near a medium or large city. If you haven’t used a TV antenna before, here is a quick primer.

A TV antenna plugs into the coax jack in the back of your television. Under settings, look for the options to scan for “Air TV” or over-the-air channels.

Once the scan is complete, you should be ready to watch your free channels. My favorite indoor TV antenna remains the ClearStream Eclipse. Read my guide on How to Choose the Best TV Antenna & DVR for more tips. The guide tackles how to get the best reception no matter where you live — California, Texas, Florida, the Northeast or Midwest.

Locast.org is a non-profit that live streams local ABC, NBC, CBS and PBS to computers and most major streaming devices.

So if you are in Locast’s coverage area, it’s a quick way to add local, live TV on your Roku or Amazon Fire TV.  I can get 22 local channels on Locast. You can easily add two to three dozen channels to your TV depending on where you live.

Locast requires you to create a profile to use its service. It’s free. But expect to get hit up for a donation while watching (a common complaint about the service). That said, it’s an easy way to get local news to stay on top of local press conferences about the coronavirus, and get a little bit of prime time entertainment for free. 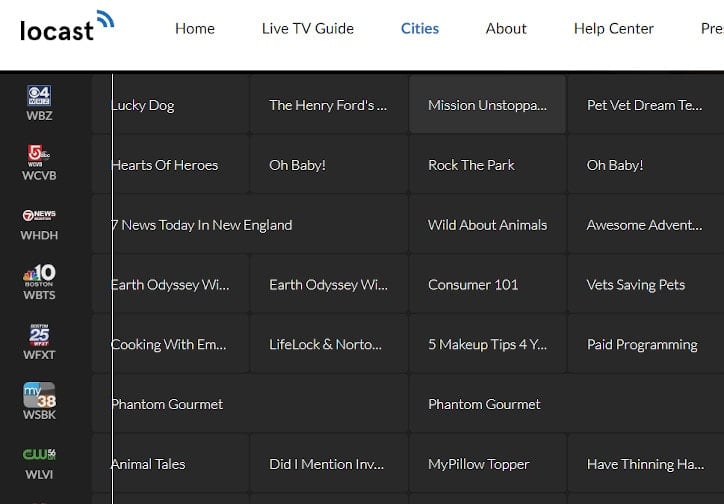 YouTube has a dedicated news section, and it’s a handy way to stay updated on the state and local level.

You’re somewhat at the mercy of local news stations. Not all of them will add its latest news clips. So if you might not always get up-to-the-hour updates on the coronavirus.

That said, YouTube is an excellent way to watch PBS NewsHour if you’re not using a TV antenna. (Its YouTube page carries frequent updates and has more news to watch than the PBS app.)

CBSN is a free, all-digital platform operated by CBS News that has grown quite a bit since its launch in November 2014.

There is a national broadcast that has a dedicated staff of reporters, anchors and around-the-clock updates.

Pluto TV is already a tremendous resource for cord cutters because of its hundreds of on-demand movies, and 200 live channels.

After trying out its revamped news section during President Trump’s news conference today, I found that NBC News NOW and CBSN were among the best.

Why? Because both channels carry live news, which isn’t always what you’ll find in Pluto’s news section.

The CNN channel on Pluto TV is not a live news stream of the cable TV channel. Pluto’s version of CNN shows news clips. You will need to use a live TV streaming service — such as Sling TV — if you want to watch CNN live without a cable TV subscription.

Haystack.TV is an app you’ll find on Fire TV devices, Roku and Apple TV. After picking out news feeds that you’re interested in, Haystack will aggregate online news from local NBC, ABC and FOX stations along with other websites such as CNET. If you are already using YouTube for news updates, then you can expect to see many of the same clips.

How to Watch FOX News, CNN and MSNBC

Sling TV is the cheapest way to live stream FOX News, CNN or MSNBC. The Sling Blue package includes all three news networks as part of its 47+ channel lineup.

The Sling Blue bundle also carries NBC and FOX stations in a number of large cities.

Here are a couple of tips if you’re going to sign up for Sling TV. Don’t spend all your time watching news updates about the Coronavirus. Sling Blue has AMC, HGTV, A&E and Comedy Central — plenty of shows and movies to get your mind off of what’s happening out in the world.

Sling TV has a free 7-day trial. But if I knew that I was getting a subscription for a couple of months, then I would take advantage of their deals that can get you some free equipment. If you pay for a two-month subscription, you can get a free Amazon Fire Stick or a TV antenna.

The first month of Sling TV is $20. The regular rate of $30 per month kicks in after that. Sling TV has apps for Roku, Amazon Fire TV, Apple TV, Chromecast, PS4, and XBox One.

The live TV service has 100+ channels, including A&E, AMC, CMT, HGTV and Discovery. fuboTV has the largest channel lineup among its competitors. A subscription is $54.99 per month, which is about the same as its competitors.

You can use a fuboTV subscription to activate about 40 TV Everywhere apps. There’s a robust on-demand movie selection. Assuming MLB starts later this spring, NBCSN, NESN and MSG is included.

fuboTV has a free 7-day trial for new customers. You can look over what local, regional sports and entertainment channels are in your area.

There are local ABC, NBC, CBS and FOX stations.

A Hulu Live subscription comes with unlimited access to its vast on-demand library of TV shows and movies. So if you have been meaning to catch up on prior seasons of shows on A&E or HGTV, Hulu is your best option to do so. Hulu has apps for Roku, Amazon Fire TV, Apple TV, iPhone and Android smartphones.

A subscription costs $54.99 per month. You can look over the channel lineup before deciding whether to sign up.

YouTube TV is the only live TV streaming service that carries local PBS stations. There are sports and entertainment channels too: ESPN, TNT, TBS, Golf Channel and AMC. A subscription costs $49.99 per month. YouTube TV has a free 7-day trial.

Can’t I just watch live news on the CNNgo app?

To watch CNN live on the CNNgo app, you will need to sign in with a cable TV provider. No live TV streaming service currently supports activating the app.

The fastest way to live stream a national news feed is under the “Featured Free” section of Roku.

In the days ahead, you may notice menu options on your streaming player that emphasize news channels or updates specifically on COVID-19.

Be sure to share with fellow readers in the comments below how you are getting updated news on Coronavirus in your home state.