This guide will show you how to live stream the 2019 World Series between the Washington Nationals and Houston Astros.

Even without a cable TV subscription, there are a number of ways that cord cutters can legally tune in to FOX for all the games with a TV antenna or by using a Roku, smartphone, Apple TV, Firestick, PC or game console.

If you want to the best World Series live stream, my pick is fuboTV. The sports-first streaming service has coverage of 94 percent of local FOX stations across the U.S.

fuboTV offers a free 7-day trial that you can easily cancel online if you don’t want to keep the service. So you can essentially live stream World Series games free for a week.

fuboTV has 100+ channels, including local FOX stations, which will carry all seven games — if necessary.

Key sports channels such as FS1, FS2, Big Ten Network, and TNT are part of the channel lineup. There are dozens of entertainment networks too, including A&E, National Geographic, History, IFC, FX, and HGTV. Subscribers get 30 hours of Cloud DVR, a massive library of movies and “look-back” which captures sporting events that aired in the last 72 hours.

Own a 4K HDR television? During the free trial, there is an NFL and college football game airing in 4K HDR. The Washington Redskins vs Minnesota Vikings in Oct. 24. Texas Tech vs Kansas is Oct. 26.

If you keep fuboTV after the trial, the regular rate of $54.99 per month kicks in.

There are solid mobile apps for iPhone and Android, fuboTV works on just about every streaming device.

Look over the fuboTV channel lineup in your area to see if it’s a good fit. If not, keep reading because you have lots of other choices.

The Astros vs Nationals face off is being viewed by many as a “throwback” World Series because of the impressive pitching lineup on both teams. 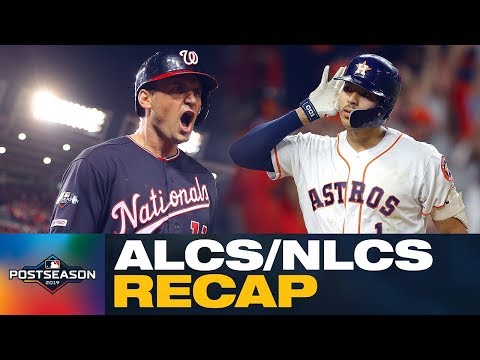 What Channel is the 2019 MLB World Series?

How to watch the World Series for free

There are advantages to owning your own TV antenna, especially during World Series week.

You will want to have a great picture when that first game kicks off at Fenway Park, especially if you have a big TV.

Well, here’s something your cable company won’t be blabbing about anytime soon. Using a TV antenna will actually give you a better picture than a cable subscription.

Broadcasts from local towers – like your local FOX affiliate – are transmitting signals that are uncompressed HD quality. You will notice quite a difference in picture quality once you set up your antenna and scan for channels. And guess what? Once the series is over, you can keep watching those channels for FREE.

My guide: How to Choose the Best TV & Antenna & DVR can give you some pointers on what to buy, along with my months-long study: The Best Indoor TV Antennas of 2019.

Hulu with Live TV is my runner-up pick this year for watching the World Series because you’re covered no matter where you go.

You could be sitting in the back of a cab with just your iPhone or kicking back in your living room watching the game on your Roku.

Either way, Hulu with Live TV has all your bases covered for getting FOX live in many places around the country. You can check out some other channels like ESPN, Viceland and CBS Sports Network.

A Hulu with Live TV subscription gives you 65+ channels for $55 per month. You will also get unlimited access to Hulu’s on-demand library and Hulu Originals like “The Handmaid’s Tale.” It’s the same Hulu on-demand service that people pay $5.99 per month for.

Look over the channel lineup on Hulu’s Live TV package to see what you’ll get in your area.

Just make sure your free trial is for the Sling Blue channel package, which carries FOX and costs $25 per month. The Blue channel bundle also has FS1, FS2, FXX and Viceland. Sling Blue subscribers get 45 channels, including NBC and FOX regional sports channels along with A&E, CNN, EPIX Drive-In, BBC America and National Geographic.

A Sling TV subscription also allows you to sign in and use the FOX Sports Go app. Sling has a free 7-day trial with no obligation.

Sling TV has a number of promotions. Get a free AirTV Mini if you prepay for two months of Sling TV. Pay only $50 for a Roku Ultra when you prepay for a three month subscription.

PlayStation Vue has been adding FOX affiliates all across the U.S. in a bid to broaden its viewership. PS Vue works on any streaming device like Roku or Fire TV.

YouTube TV is available in about half of the U.S. and has struck deals with FOX, ABC and CBS in many of those markets. For $40 per month, you can get about 50 channels and unlimited Cloud DVR. You can use Roku, Apple TV and smart phones to watch YouTube TV channels. Just don’t plan on using a Fire TV or Firestick because they are not supported. YouTube TV has 7-day free trial.

AT&T TV Now offers FOX on its entry-level channel bundle. You can check to see if FOX is offered in your area, and sign up for the Plus package, which has 50+ channels for $65 per month. AT&T TV Now has a free 7-day trial.

What’s the best way to stream the 2019 World Series?

There are a bunch of options for you to get a MLB World Series live stream without relying on Comcast, Spectrum or any other cable company. Let’s narrow down your choices to a few of the best deals.

So, how are you going to get a World Series live stream? Are you rooting for the Nationals or Astros? Tell fellow readers in the comments below.