Don’t want to pay for PBS Passport? Try this instead

If you’re researching ways to cut the cord, you might be wondering how to get PBS without cable.

But you may not realize there are a number of streaming services that already carry a big catalog of PBS shows and specials, including popular staples like NOVA and Ken Burns’ documentaries. All you need is a decent Internet connection, and a streaming device like a Roku, Apple TV or Fire TV to start watching.

I currently use the six options listed below on my Roku TV, and other streaming devices around my home. By using these streaming alternatives, you’re essentially cobbling together your own version of PBS Passport for free or with services you may already subscribe to.

PBS first began floating the idea of paid on-demand streaming service around May 2014, according to The New York Times. The rollout began the following December and continued throughout 2016. Meanwhile, PBS has also been selling digital rights to a number of other streaming services, including Netflix and Amazon Prime Video.

Netflix has enough of a well rounded catalog of PBS and BBC shows that you could easily get by without PBS Passport.

Right now, Netflix is the best place to find “The Vietnam War” series by Burns, along with his earlier docu-series, “Prohibition”, “The War” and “The Civil War”. There’s a decent amount of BBC shows that you will typically find on a local PBS station, including mysteries like “Midsomer Murders” and “Father Brown”.

So how did I find all this great PBS programming? I just went to the search bar and typed in “PBS”. Yep, it’s that simple.

There are about a few dozen PBS shows total, lots of children’s programming and nature and science specials.

You probably already have Netflix, but if you don’t, you can try it free for a month.

Right now, CuriosityStream has “Genius by Stephen Hawking”, which assembled groups of ordinary people to answer complex questions like: Can we time travel? Genius, which first aired on PBS back in 2016, is among a half dozen specials on CuriosityStream hosted by Hawking.

CuriosityStream has 76 titles from BBC that cover science, history and nature. You can comb through shows by collections to find anything hosted or narrated by David Attenborough, or a topic like Biographies or Secrets of World War II.

If you love shows like Nova, then you definitely should try out CuriosityStream for free.

Like Hawking’s Genius series, many shows pursue bigger questions about the world. I began subscribing to CuriosityStream earlier this month because of its large selection of 4K content. If you own a 4K television, being able to see the open ocean on a sunny day, or creatures that live miles below in the dark a real treat.

CuriosityStream was founded by John Hendricks, creator of the Discovery Channel. You can watch a number of episodes for free, but a subscription only costs $2.99 per month. A 4K subscription costs $9.99 per month.

CuriosityStream has a free trial that lasts until the end of 2018. There are no contracts with streaming services like this, so you can cancel online whenever you want.

If you already subscribe to Amazon Prime Video and watch shows on a Roku or other streaming device, there is already a vast library of popular PBS shows, including PBS Masterpiece at your disposal.

Run a search of PBS on the Amazon Prime Video app, and you will pull up more than 1,400 results. Here’s another neat PBS hack: After you type PBS into search, you’ll notice some other choices at the top of the screen including, “PBS documentaries”, and “PBS Masterpiece on Amazon Prime” and others.

Pick one of the other popular search terms and narrow down your choices. 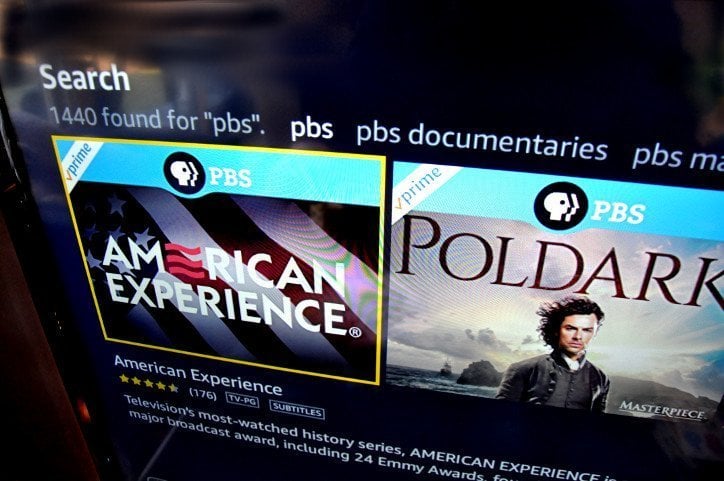 My favorite discovery was watching “The Worricker Trilogy”, a three-part series that was featured on PBS Masterpiece. After watching that series, I think I would check out just about anything Bill Nighy stars in.

A subscription to Amazon Prime costs more than PBS Passport. But it’s a service that gives you long list of benefits, including 2-day free shipping, access to 2 million songs on Prime Music, access to Kindle and audio books. Plus, you’ll get a discounts and deals with Whole Foods.

You can head over to Amazon and search for PBS shows, or get a free trial of Amazon Prime for 30-days.

PBS Kids is a free app that basically services as an on-demand catalog for Seasame Street, Super Why and Peg & Cat. Unlike PBS Passport, there’s no requirement to pay anything. You will have to go through a basic setup process once you download the PBS Kids app to a Roku or other streaming device.

Once that’s done, you’re free to peruse and watch whatever you like. True to form with PBS, there are no commercial interruptions in the middle of a program. (Your kids will appreciate that.)

Another bonus: there’s also a live stream of the PBS Kids channel in case there’s a new episode of a show that you want to see live. There’s a PBS Kids app on Roku, Fire TV devices and Apple TV devices.

Game for trying something a little more old school? There ‘s an excellent chance that you get PBS for free with a TV antenna. Most people in the U.S. live within range of broadcast towers that can get networks like PBS, CBS, NBC, ABC and FOX.

Deciding whether you need an indoor antenna or an outdoor antenna is a bit of a process, one that I’ve outlined after months of testing. Read How to Choose the Best TV Antenna & OTA DVR if you’re interested in going that route.

For years, I lived without cable while my TV collected dust. I still watched PBS NewHour every night thanks to YouTube. In the years since, the PBS NewsHour channel on YouTube has only gotten better. Now, you’ll even find a live stream press conferences and news briefings from Washington D.C. throughout the day.

The PBS Passport folks may not want to admit this, but you’ll actually find more AND more updated NewsHour content on the PBS NewsHour YouTube channel.

FAQ: Other questions about watching PBS without cable

A: You can find recent episodes of just about everything PBS offers. And there is a huge trove of things that don’t go behind the paywall like episodes of Frontline.

A: No. PBS hasn’t really delved into the live streaming market. So you won’t find any stations on YouTube TV or competitors like PlayStation Vue and Sling TV.

A: No, at the moment you won’t find any PBS shows or specials on Hulu. Given the amount of content being licensed to Netflix and Amazon, I wouldn’t expected to see anything on Hulu in the near future.

Q: Can I watch shows on the PBS web site?

A: Sure, you can find some free episodes on the PBS web site. But it’s not the most convenient way to watch if you’re used to your TV. And it doesn’t give you full seasons of shows like PBS Passport.

So now that I’ve shared all the alternatives to PBS Passport, it’s your turn. Tell fellow readers in the comments below how you like to watch PBS without cable.

This post was originally published Aug. 30, 2016 and revised for new options for streaming PBS without cable.