is a DVR for your antenna with a simple hook that sets it apart from competitors.

There is no monthly fee whatsoever. In fact, you don’t even need an Amazon Prime subscription.

I spent about a week testing out the Fire TV Recast, and it makes a compelling choice for cord cutters or anyone looking to replace their pricey cable TV subscription.

The Recast will broadcast live over-the-air TV from NBC, ABC, CBS, FOX, PBS and whatever else your TV antenna can pull in. For sports fans, that means lots of free NFL football, NCAA basketball, NASCAR, NHL hockey and soccer. Local news and whatever prime time programming you want to watch are up for grabs too.

A mobile app for Fire TV even lets you watch these channels outside of your home.

Amazon seems intent on using Recast to compete with similar OTA DVRs from TiVo, Tablo and SiliconDust, the makers of HDHomeRun tuners.

With millions of Fire TV units already in homes around the U.S., the Fire TV Recast may turn out to be a consumer-friendly way for more people to jump into cord cutting.

If you don’t already own a Fire TV device  — whether it’s a Fire Stick or the latest Fire TV Cube — you’ll need one to use Recast. You will also need a TV antenna to plug into the Fire TV Recast. 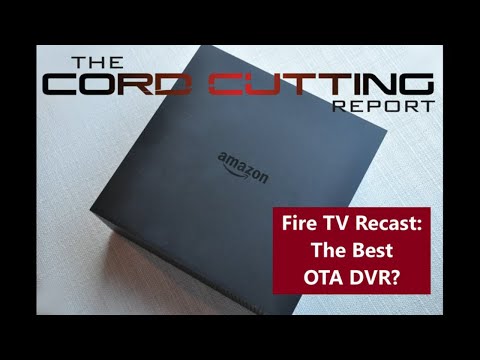 There are two Recast models available:

Setting up the Fire TV Recast

The Recast is easy to set up. The Fire TV app on your smartphone will tell you what direction to place your antenna. (For me, it was south.) The antenna is connected to the Fire TV Recast. And from the app, the Recast scans for channels.

Once that’s done, you’ll be able to watch free, live TV from channels like NBC, FOX, PBS and CBS into your main menu of any Fire TV device. Watch any of your recordings from those channels on any device in the Amazon family, including Kindles and iOS devices.

The combo of a Fire TV streaming device

with a Recast can make you forget about cable TV pretty easily, especially when you start using the new channel guide.

There are a few ways you can look over your antenna channels on the Fire TV.

On the main menu of the Fire TV, you’ll notice a new row: ‘On Now’ which shows what’s currently airing on over-the-air channels. If you drift off to another part of the menu, you can return to the show you were watching under the ‘Recent’ row as well.

I prefer to use the channel guide for finding something to watch. The channel guide is designed for scheduling recordings, but you can also use it to quickly surf through what’s currently on.

There’s a quick way to get to the channel guide, which I really like. Under the “Recent” tab, if you hover over an antenna channel, click on the hamburger button on your remote. A side menu will pop up that lets you choose channel guide.

The grid-style channel guide will be familiar to any cable subscriber. You can find your antenna channels there alongside others, depending on your subscriptions.

A budget conscious person who only needed a small amount of antenna channels could easily get by with an antenna and free streaming apps like Pluto TV.

The channel guide lets you schedule recordings 14 days from today.

From the DVR tab, you can schedule recordings, and view up to two weeks of programming. If you’re channel surfing and spot something you want to watch later, you can also begin recording right away.

There is no way to schedule the DVR when you’re not at home (bummer!), but you can add buffering times to recorded events. So if you’re recording an NFL football game or another sporting event, no worries.

I wasn’t thrilled with the Recast’s limited ability to skip commercials. You can fast forward 30 seconds at a time. That’s it. Amazon could learn a thing or two from a software hub like Plex, which is becoming a popular solution for those willing to cobble together their own OTA DVR like me.

Which external hard drives are compatible with Fire TV Recast?

Amazon says that performance or compatibility with other hard drives is not guaranteed.

What does Fire TV Recast work with?

Once it’s connected, the OTA signal can be broadcast across your home network to smart phones, Fire TV devices and tablets.

But since this is an Amazon product, the compatible devices are Fire TV Sticks

and all older Fire TV devices.

will work, too. There are a few non-Amazon devices that are compatible. Apple iPads, iPhones, Android smart phones and tablets will work. If you’re looking for an OTA DVR to work with your Roku, the Fire TV Recast isn’t it.

The Recast and Tablo have built-in hard drives. You need to add your own hard drive with a HDHomeRun tuner.

Watch Recorded Shows Outside of Home

It was smart of Amazon to have device compatibility with iPhones and Android smart phones. There’s a growing amount of data showing that Millennials and younger generations prefer to watch shows, movies and sports on smart phones instead of TVs.

The Recast will let users stream content outside of the home through the Fire TV app. Ideally, you’d be using WiFi instead of eating into your cellular data. The Fire TV app is free.

After spending months using the HDHomeRun app, and the software hub PLEX, the Fire TV app comes off as a bit clunky when it comes to watching TV on the go.

The thumbnails are way too big. Even on a large smart phone with a nearly 6” screen, I can only see what’s on two channels at once without scrolling. Competitors like SiliconDust’s HDHomeRun has a sides scrolling menu that let’s you see what else is on while you’re watching on your phone.

Even the free streaming service Pluto TV has a more user friendly channel guide on mobile with a clicker on the side that lets you channel surf.

That said, this is far from a deal breaker. I was very happy with the picture clarity and didn’t encounter any lag or blips while watching on my home network.

How many streams does Fire TV Recast have?

allows you to stream to any two compatible devices at a time. Amazon says that the Recast will automatically optimize the use of bandwidth on your local network, delivering the best HD picture quality possible—even when streaming across multiple devices in a congested Wi-Fi environment.

comes with a 64GB hard drive. One advantage that the Tablo and HDHomeRun have over the new Fire TV Recast is that you can use it on more devices. The Fire TV Recast

will be ideal for homes that mostly use Fire TV and other Amazon devices.

Here’s a list of compatible devices for Tablo Dual users.

The list of compatible devices for HDHomeRun tuners goes even longer. Windows 10

And one big difference with HDHomeRun tuners

is that you can choose what kind of channel guide/DVR hub that you’re going to use. SiliconDust offers its own channel guide and DVR service for $35 per year. The Channels app works exceptionally well for Fire TV and Apple TV.

I’ve been using PLEX for the past year, and set up my NVIDIA Shield TV so that it functions as my DVR and player. You can read my review of NVIDIA Shield PRO with Plex for more on that setup. Plex Pass costs $5 per month, or you can get a Lifetime Pass for about $149.

With Alexa on Fire TV or Echo Show, you’ll be able to control the Fire TV Recast with your voice and quickly get to the programs you want. You can use your voice to change the channel, or search for your favorite live TV shows.

“Alexa, open Channel Guide,” or “Alexa, play ‘The Voice.’” Amazon says the Fire TV Recast is going to get even better over time with software updates to Alexa.

Is the Fire TV Recast a Cable TV replacement?

For anyone who can get local stations fairly well, and is already all-in with the Fire TV and Amazon Echo universe, the Fire TV Recast is easy to recommend.

It’s one of the simplest ways to replace your cable TV subscription that you’ve had for years with Comcast, Spectrum or any other company. Of course, you’ll only get live channels like local NBC, CBS or FOX stations that are transmitted from broadcast towers.

Amazon was wise to not include its own Amazon Basics antenna with the Fire TV Recast. Consumers will have to do their own legwork identifying the best TV antenna that will work in your region of the U.S. Some may need a quality indoor antenna, while others will definitely need a more powerful outdoor antenna mounted to a roof or attic.

That’s pretty simple to do these days with online tools like AntennaWeb. Also, see my guide on the best indoor TV antennas.

So long as you learn how to get an affordable Internet connection like me, you can significantly knock down the price of a triple digit cable bill to something reasonable.

Amazon is well known for improving its hardware through software updates, so I’m looking forward to seeing what improvements will be made to the Fire TV Recast. Amazon has released some more specifics through a FAQ page.

Which Fire TV Recast is a better buy?

The answer will depend on how many TV viewers (and recorders) you have at home. Just remember, the 2–tuner model comes with 500GB of storage that allows you to record up to 2 shows at once and holds up to 75 hours of HD programming for $229.99.

The 4–tuner model comes with 1TB of storage that allows you to record up to 4 shows at once and holds up to 150 hours of HD programming for $279.99. Fire TV Recast does not require any additional monthly charges or subscription fees. Pretty soon, Amazon says you will be able to expand the built-in storage of your Fire TV Recast by connecting an external hard drive to the USB port on the back of the device.

For more tips on getting rid of cable, head over to the main page of The Cord Cutting Report.