How to Watch the NBA Online Without Cable

People will tell you that live streaming NBA games can be tricky enterprise.

But don’t be fooled.

It’s not that tough to figure out if you take a team-specific approach.

This guide will break down your choices for live streaming most NBA teams across the U.S. without cable. And you won’t need some shady reddit link for watching NBA games online either.

For most NBA fans, Hulu with Live TV

is the best streaming service to watch games throughout the entire season. Hulu offers a free 7-day trial

Subscribers get 50 hours of Cloud DVR service and unlimited access to Hulu’s on-demand library. So you’re essentially getting two streaming services for the price of one. You won’t have NBA TV with Hulu. If NBA TV is crucial, then try out fuboTV free for a week. fuboTV has the same exact coverage for regional sports networks, but no ESPN.

You also may be able to score a decent deal with a Sling TV subscription for regional sports channels that cover the 25 NBA teams listed below, especially if you’re the kind of cord cutter that uses a TV antenna for ABC. Sling TV also has a free trial that lasts a week.

Let’s dive in further into what channels you’ll need for the 2018 NBA season, so you can figure out what will work best for you.

For nationally televised games, you will need ABC, ESPN, ESPN2, ESPN3, TNT and NBA TV. Depending on the team you follow, regional NBC Sports (NBCSN) and regional FOX Sports networks will be crucial for you to live stream NBA games all season.

Before you pick a streaming service to watch NBA games, you should look over the schedule for your favorite team on NBA.com. Its calendar page can narrow down your results by team and month. Make sure you look at results for October, November and December by clicking on the calendar box to the left of the page. Here are a few highlights of how many games are televised on each network.

Either fuboTV or Hulu’s Live TV service is the best deal for the following team coverage:

I picked Hulu with Live TV as my top pick because you are getting more value out of your $40 per month subscription compared to competing services. Subscribers get 50+ live TV channels, 50 hours of Cloud DVR and access to Hulu’s on-demand library that people usually pay $7.99 per month for. That includes Hulu Originals like “The Path” and “Castle Rock”.

You may notice that there are a few teams missing from this list. Specifically: the Houston Rockets, L.A. Lakers, Toronto Raptors and Utah Jazz. Regional sports networks that carry games for those teams are currently not offered by live TV streaming services.

fuboTV is currently the only live streaming service that carries MSG Network. You’ll also get NBA TV, and TNT and a bunch of regional sports networks, but you won’t have ABC or ESPN.

You can catch ABC games by hooking up a TV antenna. And according to ESPN’s own schedule, the network is only broadcast for regular season Knicks games. So having ESPN might not be as important to you as having MSG Network. 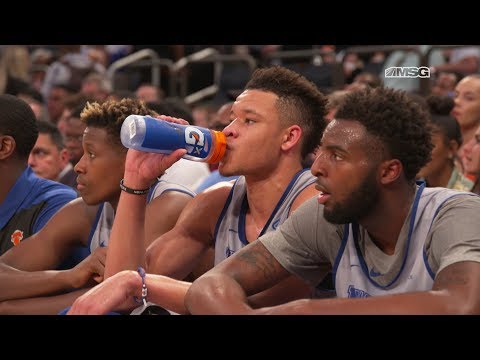 fuboTV gets you 80+ channels and 30 hours of Cloud DVR for $44.99 per month. You don’t really need much DVR space if you miss a game because fuboTV has a “look back” feature that airs all sporting events that aired in the last 72 hours.

With a fuboTV subscription, you will also be able to sign in to the MSGGo app on your smartphone, Roku, Apple TV, PC or other streaming device. fuboTV has apps for every major streaming device, including Fire TV, Firestick, Roku, Android TV and Apple TV. fuboTV has solid mobile apps to live stream NBA games on iPhone and Android smartphones.

You can see what regional sports networks in your area are part of the entry-level channel lineup.

Subscribers can stream on up to two devices at once. fuboTV offers a free 7-day trial.

fuboTV also just started carrying NBA League Pass at $28.99 per month. NBA League Pass is geared for live streaming NBA games that are out of market. It’s not an option for your watching your local team.

Here’s another thing to be aware of with Sling TV. Regional sports channels for NBC and FOX are on Sling Blue along with FS1, FS2, and TNT. Getting NBA TV with the Blue package costs an extra $10 per month for the Sports Extra bundle.

Sling Orange will get you ESPN, ESPN2, ESPN3 (which airs ABC games) and TNT. That gets you most of the games for $25 per month. Adding NBA TV through the Sports Extra bundle costs only $5 per month with Sling Orange.

But that leaves some fans facing the option of getting both Sling Orange and Blue for $40 per month for all the channels. For Cloud DVR, you’ll pay another $5 per month for 50 hours. Look over the Sling TV channel lineup before deciding on whether you want to try out the service free for a week.

YouTube TV is also an excellent option for live streaming NBA games at $40 per month. You get 50+ live channels, unlimited Cloud DVR and NBA TV in the channel lineup.

This season, YouTube TV began offering NBA League Pass, which is ideal if your favorite team is outside of your local market. YouTube TV alone costs $40 per month, and an additional $40 for NBA League Pass. One thing to be aware of with NBA League Pass is that there are a number of good match-ups that are exclusive to TNT and ESPN.

YouTube TV offers a free 7-day trial, but the service does not support streaming on Firestick or Fire TV devices. You can get an NBA live stream through YouTube TV using a Roku, Apple TV, iPhone, Android smartphone and PC.

DirecTV Now has coverage for the 24 teams listed above with Hulu, but to get access to regional sports networks you will have to subscribe to the “Just Right” bundle at $55 per month. That also gets you ESPN, TNT and NBA TV. You can look over the DirecTV Now channel lineup. The service offers a free 7-day trial.

PlayStation Vue offers TNT, ESPN, ESPN2, ESPN3, NBA TV and some regional sports networks in the Core bundle. PS Vue has coverage for just about all of the 25 teams listed above. Subscribers get ESPN, ESPN2, TNT and NBA TV.

There are a lot more options in 2018 to get an NBA live stream on a Roku, Apple TV, Firestick and a smartphone than ever before. Picking the best option will largely depend on what team you want to follow, but I think there are a few general choices out of the bunch that will be a cheaper alternative than cable TV for most people.

will have coverage for most teams and best overall features at $40 per month, including games on ESPN, ABC, ESPN2, ESPN3 and TNT. Check out the channel lineup in your area, or sign up for a
free 7-day trial. There are no contracts or obligations and you can easily cancel online.

If you depend on regional sports networks to stream NBA games, then you should look over the fuboTV channel lineup in your area. It’s the only live streaming service with MSG Network for New York Knicks games, but it lacks ESPN. You can try out fuboTV free for a week. fuboTV works with Roku, Apple TV, Fire TV, Firestick, Android TV devices, iPhones and Android smartphones.

Sling TV is a good budget option for a lot of people. The Sling Blue plan has regional sports channels for just over 20 teams. Sling Orange will get you ESPN, ESPN2, ESPN3 (which airs ABC games) and TNT. Adding NBA TV through the Sports Extra bundle costs only $5 per month with Sling Orange. Look over the channel options in your area. Sling TV offers a free 7-day trial.

Now that I’ve detailed all the ways to watch your favorite teams, it’s time for you to share. How do you plan on getting an NBA live stream to your TV or phone? Tell fellow readers in the comments below.