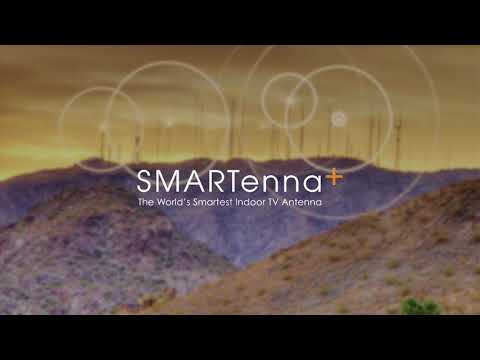 Channel Master says the SMARTenna+ has seven different antenna reception patterns, giving it the equivalent power of an antenna in seven different locations in the room at the same time.

Here’s how the folks at Channel Master explained it in a released statement:

Where all other indoor TV antennas need to be physically repositioned to find and acquire optimum signal reception, SMARTenna+ can remain stationary while simply adjusting its internal reception pattern, either automatically during initial setup or at any time thereafter by pushing a button on the processor housing.

Joe Bingochea, executive vice president of product development at Channel Master, said in a statement: “We worked with Ethertronics to bring that same patented smart wireless technology, known as Active Steering, to over-the-air television reception applications and house it within a modern television antenna.”

“The continued growth of cord cutting has created a market boom for TV antennas, but getting good indoor reception can be a frustrating experience,” said Vahid Manian, chief operating officer at Ethertronics. “By incorporating Active Steering, Channel Master has delivered a breakthrough product in SMARTenna+ that brings a level of performance and convenience to indoor TV reception that has never existed before.”

SMARTenna+ will retail for $89 and will first be available through Channel Master’s online store. Pre-orders are available now with inventory expected before the end of March.