A new crop of 65-inch 4K HDR gaming displays with a built-in NVIDIA Shield were unveiled at CES 2018.

The Big Format Gaming Display, or BFGD, is being manufactured in partnership with ACER, ASUS and HP, according to NVIDIA. These new displays are expected to be released later this year, and are aimed at PC gamers opting for 4K HDR televisions.

But for cord cutters, a BFGD may prove to be an appealing choice as a premium all-in-one device. With a built-in NVIDIA Shield, BFGDs have all the same streaming apps for Amazon, HBO, Hulu, Netflix and YouTube.

The Shield already has a number of apps for live TV streaming platforms like PlayStation Vue, YouTube TV, Sling TV and others. The displays will have Plex and Kodi support. BFGD won’t leave behind any other goodies that already comes with NVIDIA Shield TV.

NVIDIA has been working for over two years with leading panel producer AU Optronics to create the displays. Unlike a typical 4K HDR television, BFGDs will run at 4K at 120Hz, have G-SYNC technology, HDR with 1000 nit peak brightness. 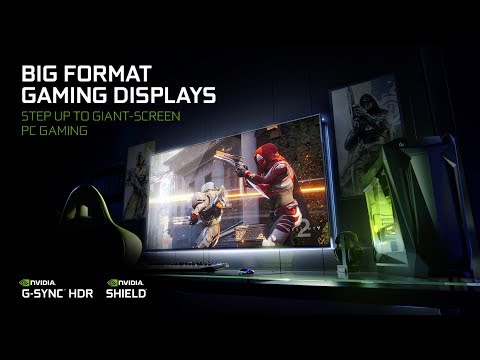 Here’s what else NVIDIA says about BFGD:

In practice, all this tech ensures your gun fires instantly in PUBG when facing down a foe, that movement is clear and free of blur, that there’s no tearing or stuttering when playing, and that the action shown is at the highest levels of detail possible when you play with a suitably-powerful graphics card.

And should you play with HDR enabled, our best in-class tech ensures you’ll receive the clearest, brightest, most vivid HDR experience seen to date on PC displays. What’s more, BFGDs have ultra-low input latency, just like a PC gaming monitor, for the most fluid and responsive big screen gaming experience.

Watch Movies At Their Original Framerates

NVIDIA says with the integration of G-SYNC, BFGDs will also be able to display movies and shows as they were intended to be viewed by a director.

On other displays, various processes are used to playback 24 FPS movies and videos at 60 Hz, which results in noticeable judder and blurriness in panning scenes and moments of fast action. Some techniques and processes are better than others, but before now you could never approach the clarity of a high-quality cinema setup at home.

By using G-SYNC’s variable refresh rate technology, and a true 120Hz panel, BFGDs can be set to a genuine 24 Hz to match the framerate of the source material. NVIDIA says that setting can give you a cinema-quality experience at home. The same will also hold true for 48 FPS High Frame Rate content, 23.976 FPS U.S. broadcast television shows, and the framerate of any other media you access.