Why I joined Philo and dumped PlayStation Vue

When I dumped my subscription to PlayStation Vue for Philo this week, I realized there are some immediate benefits that could apply to just about anyone who subscribes to live streaming TV.

In the spirit of trying to be useful, I’m jotting down a few liner notes about hitting the reset button with my cord cutting ways. I will write a full review of Philo at a later date.

My PlayStation Vue bill went up $10 per month in November. Like a lot of PS Vue customers, I took a hard look at what I was actually watching.

I subscribed to the Elite channel bundle for nearly two years, which gave me about 92 live channels. At $45 per month, it felt like a bargain. My Internet connection cost $35 per month through most of 2016 and 2017 after I taught myself how to negotiate a better deal.

So overall, subscribing to PS Vue was great.

But then some of the Vue channel lineup changed. Then Sony announced over the summer Vue’s rates would increase by $10 per month for most customers. They seemed to waver on the decision before finally increasing my rate. It was all very wishy-washy, and not well executed.

Whatever. It’s their business decision.

My price increase didn’t kick in until last month. And once I saw $54.99 withdrawal from Sony on my bank statement, I felt like I was back to where I started with one of my last cable bills.

One of the old pitfalls of cable TV felt tangible again. I was paying for the option to watch many things, but rarely taking advantage of it.

Taking stock of my channel lineup

When I did an accounting of what my wife and I are really watching, I realized that we were spending too much money. We were using PlayStation Vue for just a few channels, less than 5 percent of its offerings.

So as I sit here, I have 44 channels coming from my antenna. My antenna gives me NBC, CBS, ABC, FOX, PBS and many more networks. I have come to appreciate sub-channels, especially genre-specific ones like ESCAPE. I can record whatever I like using Plex DVR and a NVIDIA Shield Pro

, which has a 500GB hard drive. I have even more external storage too if I need it.

The other 92 channels come from Pluto TV, the free live streaming platform. Pluto has a number of great channels. My favorite? Live Music Replay. I’ve also spotted a few movies in the on-demand library that I want to watch soon.

PlayStation Vue vs Philo: What am I really giving up?

Here’s the most important thing I realized. Having an awesome channel and actually carving out the time to watch it are two very different things. I think we all get a little bit caught up with the desire to have certain channels, and we gladly pay for them, but these channels are rarely, if ever, watched.

What channels am I talking about? It will likely vary from person to person. If you’re honest with yourself, you can come up with a list without putting in too much work. There’s no doubt that I’m sacrificing some decent channels by dropping PlayStation Vue. TNT and TBS are toast. No more CNN. FX or National Geographic are gone. All the sports channels are out.

These are all cool channels, but how much am I really watching them? Not much.

I love PlayStation Vue’s interface, especially the new one on Roku OS8. All the TV Everywhere support is fantastic. Realizing that I don’t use is a wake-up call.

What I’m getting with Philo

Maybe I haven’t learned as much I thought. Instead of truly downsizing, I opted for Philo’s largest bundle – 46 channels for $20 per month. I could have opted for the bare minimum – 37 channels for $16 per month. But I wanted some channels I had been missing.

I get back all the Viacom channels that Sony ditched months ago, including MTV Live and Spike. Viceland is added to the mix and I get to keep Animal Planet.

AMC is here for when Better Call Saul returns next season. Sundance TV and History channels will be watched with frequency. For $20, I also get to take care of basic features like unlimited DVR. 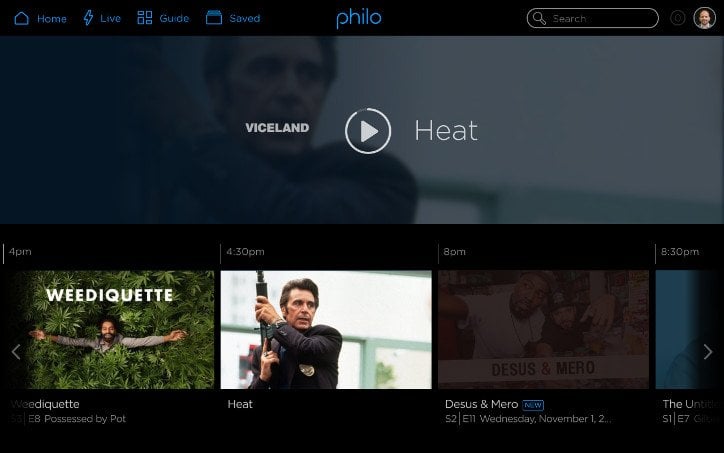 According to Philo CEO Andrew McCollum, support for TV Everywhere apps is coming in early 2018. So I won’t be missing that for long. He also hinted during a Reddit AMA this week that Philo wouldn’t rule out adding sports channels. He suggested sports channels and others may come in the form add-on channel bundles.

Roku is the only streaming device that has Philo support. You can also use an iPhone, Android smartphone, PC or Mac. McCollum said more streaming devices will be supported soon. Right now, I’m using a Roku TV in one room and a Roku Streaming Stick+ in the other.

Philo has some room to improve with its user interface. As some other redditors noted, having an in-picture channel guide like Pluto TV, or even an interface closer to Vue would do a lot for Philo.

It’s early in the game for this live streaming service. Philo just launched on November 14. Either way, Philo has made my television set a lot more interesting again.

Remember that first time you cut the cord? Did you have the feeling like you somehow regained something? Well, that’s what I’m trying to sum up here.

Paying only $20 per month also frees up some cash. If I really wanted to get wild with my spending, I could check out some Amazon Channels like Showtime for $9 per month. Paying $99 for a year’s worth of FilmStruck seems like a solid investment.

Should you switch up your streaming service in 2018?

Here’s the salient lesson about cutting the cord that nobody is talking about.

Once you take better control of how much you pay for TV on a month to month basis, the work you put into deciding what you want, and how much you should pay for it every month does not end there.

I could have easily kept paying the extra money for PlayStation Vue because I like the service quite a bit. But the price increase and channel shuffling in recent months left me feeling like there were better deals to be had elsewhere.

Philo offers one of the best deals out there, especially with its skinny bundle of 37 channels for $16 per month. There’s an element of joy in starting over. TV becomes a bit more alive again. New channels come into the mix, while others that I never really watched go away.

Have you tried out Philo? Tell fellow readers what you think of their service in the comments below.