There are a lot of choices out there for streaming what will go down as one of the most viewed fights in history.

If you don’t subscribe to cable, but want to watch boxing legend Floyd Mayweather duke it out with UFC star Conor McGregor, here’s a quick primer of where and how to buy the fight. It’s a face off that many believed was nothing more than a fantasy. Mayweather, 40, who has 12 world titles among five weight classes, has come out of a two-year retirement.

McGregor is crossing over to boxing from MMA to take on Mayweather. Some boxing fans have totally panned the fight, claiming it’s only a detriment to the sport of boxing. But the Nevada State Athletic Commission didn’t see it that way. By sanctioning a 12-round junior middleweight fight, the commission created a fight no one thought possible, capturing imaginations and attention worldwide.

McGregor and Mayweather both have huge personalities, a fact that has been on full display at each press conference. The fervor leading up to this fight couldn’t be any greater. 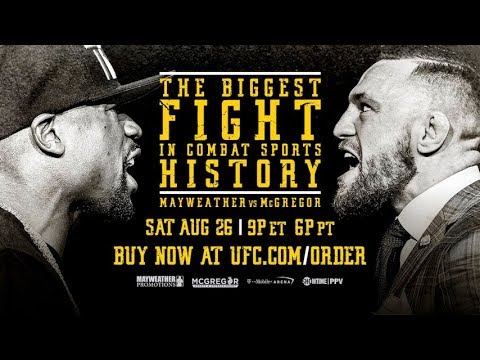 When does the Mayweather vs McGregor fight start?

How to purchase Mayweather vs McGregor without cable

Deciding which service to watch the fight is important. There’s five ways to stream the Mayweather vs McGregor bout, but only two ways that work on a Roku or Amazon Fire TV.

Below is a chart that will give you all your choices.

This quick guide is primarily geared for cord cutters, or people who don’t have a traditional cable subscription. If you subscribe to Comcast, Spectrum or other major cable company, chances are you can purchase the fight directly from your provider. Since a record number of people are expected to live stream the fight online, it’s important to know your choices, and the limitations each option has.

You should also make your decision as early as possible. Billing systems have been known to lock up when there’s an event that’s in exceptionally high demand. It will also give you more time to make sure you have your streaming situation up and running smoothly well before fight time.

Let’s quickly talk about the prelims before running through your choices.

How to watch Mayweather vs McGregor Prelim fights for free

The actual fight is pay-per-view only, but you can actually catch some of the coverage and couple preliminary bouts without shelling out for the fight. The Prelim fights start at 7 p.m. on FOX.

If you own a TV antenna, you can watch these preliminary bouts absolutely free. You may want head over to AntennaWeb.org first to see if you can get a decent signal for FOX. My guide for selecting the best antennas can give you some pointers for tapping into over-the-air (OTA) broadcasts.


What’s the best way to watch Mayweather vs McGregor?

And you will only get one stream no matter what.

For most streaming options, the UFC PPV is the easiest way to stream the fight with a few exceptions. You won’t be able to stream on a PC, Mac, PlayStation 4 or Channel Master DVR if you use the UFC PPV option. That’s not a huge deal for a lot of people.

The option with most device coverage, and some neat features like pausing, rewinding, and the ability to replay the fight is surprisingly Sling TV.

Even if you’re not already a Sling TV subscriber, you can still use a free 7-day trial to create an account and purchase the fight for $99.99 plus taxes. The fight will be available in both English and Spanish. (The fight isn’t available to purchase directly through the Sling app on iOS or Apple TV devices, according to Sling TV.)

Once purchased, you will see two new channels appear at the beginning of your channel guide, in English and in Spanish, and the channel will go live as soon as event coverage begins. Throughout the fight, customers may pause, rewind and fast forward content. Sling TV customers will be able to replay the fight for six days following the event. Just be sure to cancel your free Sling TV trial before the end of the trial period so you don’t get billed for a month of service.

(* N/A = information was not available.)

Are there any deals during the Mayweather vs McGregor fight?

No, not for the fight itself. But if you’ve been considering trying out Sling TV for longer than 7 days, or have been thinking about buying a streaming device, you may want to bundle one of their promotions with your PPV purchase.

Taking advantage of these promotions might only make sense if you were considering buying a new streaming device anyway. Otherwise, utilizing Sling TV’s free 7-day trial to purchase the fight, or buying it directly from UFC PPV is the way to go.