The company is one of three that are expected to manufacture 4K Ultra HD televisions with Fire TV software and voice remote. Seiki and Westinghouse are also expected to release similar TVs this year. The Element TVs will begin shipping on June 14.

A video released this morning on Amazon’s web site shows how the Alexa-voice controlled remote allows users to switch channels and call up a weather forecast or details about a local restaurant. The televisions will compete directly with Roku, which has dominated the Smart TV market for months. TCL, one of the leading manufacturers of Roku TVs, is expected to release new models this year that include Dolby Vision HDR. 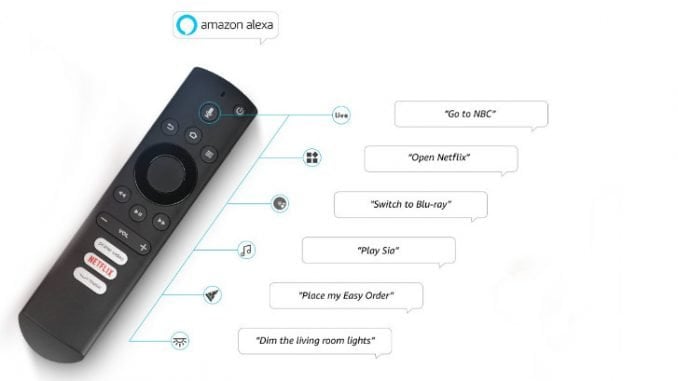 The Element line of TVs could also push its way into a segment of the streaming device and antenna market that is attempting to integrate streaming services and over-the-air channels.

The Element Fire TV Edition is described by Amazon as a “Smart TV experience that seamlessly integrates your favorite streaming and live over-the-air content on a unified home screen.”

Amazon is also offering a free over-the-air antenna to customers buying the new Element TV for a limited time. Streaming devices like AirTV Player was released earlier this year with much fanfare for integrating OTA channels and a Sling TV subscription into a single menu. The Element TV doesn’t appear to have single menu integration with a streaming service. But it comes with a fully integrated TV tuner and channel guide for OTA channels.

Fire TV software also has the ability to search across 140 channels and platforms including Netflix, HBO, Hulu, HBO Now, Showtime, Starz and Prime Video. Seiki and Westinghouse first demonstrated the new line of 4K Ultra HD Smart TVs in January at CES 2017 in Las Vegas. No details were provided about when those televisions will come on the market. All three TV manufacturers are owned by the same parent company.