The tabletop-style antenna pulled in all the over (OTA) channels that I expected with a high signal quality.

But I also wound up with a few more channels that I didn’t have before.

I tested the Micron XG with two fairly new 1080p resolution TVs on opposite ends of my home. Those televisions already use two different style antennas to receive OTA channels with good results.

After connecting the Micron XG and scanning for channels, the picture was bright, crisp and in high definition for major and some minor networks in my region.

Picking the right high definition antenna is getting more challenging these days. The variety of shapes and styles is enormous and growing.

In the world of cord cutting, 2017 may become the year that’s remembered as the one where OTA channels and streaming platforms came together.

This year, Mohu is expected to release its much anticipated Mohu Airwave, a tabletop antenna that will broadcast live OTA channels to apps on Roku and other popular over-the-top streaming devices.

CES 2017 suggested these two products are just the beginning.

There’s no doubt that Antennas Direct is already a major player in this realm.

The company gained much notoriety last year when The Wirecutter named the ClearStream Eclipse the best indoor HDTV antenna.

After testing out a ClearStream Eclipse that belonged to a friend, it was obvious that the patented Tapered Loop Technology lived up to the hype. I was jealous.

It easily pulled in channels with better signal quality than anything I had used before, including two other antennas I already had in my home.

It made me wonder about the performance of the Eclipse’s lesser known cousin, the Micron XG.

The Micron XG is advertised on the box as being able to pull in free UHF HDTV channels within a 35-mile radius. The antenna comes with a 20-db line-amplifier and two base stands, which holds the antenna itself and a metal reflector.

The antenna panel is connected to six feet of non-detachable coaxial cable. Another three feet cable is included, which is used to connect to the in-line amplifier.

The face of the antenna and its reflector both measure about 9 inches wide and 11 inches tall. The two panels are seated on opposite ends of two six-inch plastic brackets.

A minor drawback with the Micron XG setup came with its power adapter for the in-line amplifier.

The small cube shaped power adapter needs an outlet nearby to plug into. Finding an nearby outlet wasn’t an obstacle for either of my TVs. But that may not always be ideal for a wall-mounted television.

With my current leaf antenna, there’s an option to power the amplifier via a USB outlet in the rear of my television, similar to what you see with a Google Chromecast. 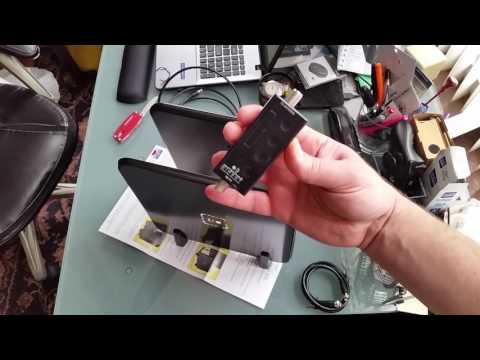 I got UHF and VHF channels without any problems during my testing on both TVs. Channel reception can vary greatly depending on geography and distance from towers in your region. I prefer using AntennaWeb to get a comprehensive glimpse of possible channels in my area. I recommend you take a look at what towers are in your area to help you identify what kind of high definition antenna you might need.

You may realize that you need to mount an outdoor antenna in your attic or on your roof.

There was no doubt that the Micron XG was giving me more than the amplified leaf-style antenna that had a 50-mile range.

The proof came with the channels.

The Micron XG easily pulled in a new NBC affiliate that had eluded the leaf antenna – despite the tower being less than 10 miles away. (I had re-scanned for this channel multiple times before using the leaf antenna without any luck.)

To give you some perspective, my home is between 10 and 40 miles away from the majority of the towers that I am pulling in channels from. I live in a metropolitan area and an indoor antenna is adequate for the local channels that I want.

High definition channels such as Bounce TV and Escape TV were now in my channel lineup in two places.

I also came away with two more PBS stations from neighboring states. Their towers are more than 70 miles away, and all three channels offered different programming.

Losing the occasional artifact that popped up across my screen was noticeable as well. Such improvements will become in demand a lot more if newer devices like the AirTV Player become popular.

For the uninitiated, there’s a brave new world of television that lives under the surface of your pricey cable subscription. It’s been there for a while, simmering and growing while you’ve been doling out a sizable portion of your paycheck to a local cable or satellite TV provider.

What exactly can you watch (and even DVR) with a high definition antenna? Again, it’s best to do a quick search of which towers are closest to you. I was getting just over 60 channels before testing the ClearStream antenna.

Here’s a short list to serve as a starting point, which will give you an idea of what’s possible.

NBC, CBS and FOX: Primetime shows like The Blacklist, Empire or Criminal Minds are on these channels. You can also dial in some occasional football games, or just catch the national or local news.

PBS: Anyone with a Netflix account has likely noticed the number of shows that first appeared on Public Broadcasting Service. Downtown Abbey, American Masters and Nova a hugely popular. I’m a diehard Austin City Limits fan. There is a also hours and hours of great PBS Kids content all free for the taking.

CW: Get your superhero or Sci-Fi fix on this channel with shows like DC’s Legends of Tomorrow, or The 100.

Any show or football game off of these channels is coming to you free for life. You can even record all of this programming if you go the route of pairing a high definition antenna with an OTA DVR. I wouldn’t hesitate pairing a Micron XG with a HDHomeRun Extend

or even a Tablo

Compared to the ClearStream Eclipse, you may not have the same ease with finding a location to put the Micron XG.

The ClearStream Eclipse can stick on any wall. It also has a detachable 12-foot coaxial cable that makes it a little easier to use a longer or shorter cord.

With the Micron XG antenna

, the coaxial cable is fixed and you will need some nearby table or shelf space for it. The front of the antenna didn’t snap into the bracket as firmly as the metal reflector. Instead, it sits in the grooves of the bracket.

But the size of the Micron XG was by no means a deal breaker for me. I was able to find space behind my bedroom TV that faced a window.

The Micron XG is definitely among the better high definition antennas on the market. But you need to make sure you have space for it.

For people who mount their TV on the wall, the ClearStream Eclipse

is a better fit. I hope this review was helpful. Feel free to write in any comments or questions.

If you already use an antenna, or an OTA DVR, share with readers your setup in the comments below.