At roughly half the price of a PlayStation 4 Pro

, the 2017 refresh of NVIDIA SHIELD TV is now offering major game titles once exclusive to its larger competitors.

Its subscription-based GeForce NOW is also expanding this year. Ubisoft is bringing some of its most popular games to GeForce NOW, including Assassin’s Creed, Far Cry, Watch Dogs and two Tom Clancy titles.

NVIDIA says that it will soon announce a list of specific games for GeForce NOW members to play. The games can be purchased through the GeForce NOW store.

If you already own some Ubisoft games, you can link your GeForce Now with your Ubisoft account to play those titles that you’ve purchased. Microsoft Xbox One S is our runner-up choice for early 2017 because of features like backwards compatibility for older XBox 360 games and the Ultra HD Blu Ray player.

There’s something else that NVIDIA SHIELD has over PlayStation 4 Pro, Xbox One S, and Nintendo Switch besides price.

NVIDIA SHIELD TV is stepping into some new territory as a smart home hub. Imagine being able to talk to your TV to adjust the Nest Thermostat without interrupting your campaign of Mass Effect Andromeda. With NVIDIA SPOT, you will be able to do that and a lot more. 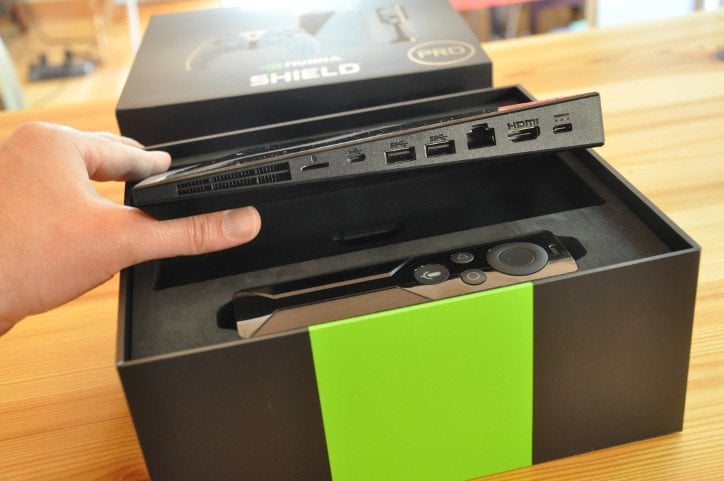 You can also use your voice to peruse 4K HDR content to find something to watch on Netflix and other platforms.

While PS4 has a more impressive game catalog, you can’t control your house with it, or command it to hunt down a cool movie to watch. So in some respects, NVIDIA SHIELD TV

may be the best game console to buy this year.

A lot is happening in the gaming world in 2017 with the anticipated influx of eye popping, 4K graphics and VR glasses. Game consoles are now doubling as entertainment centers that can bring you alternatives to cable like Sling TV and PlayStation Vue. Microsoft is about to release it’s long awaited Project Scorpio console — Xbox One X, but you will likely have to wait until the end of the year for it.

By answering the two questions above, you’re figuring out what’s unique about the console you’re going to buy. And that’s the major selling point companies like Sony, Microsoft and Nintendo.

Our guide to buying to the best game consoles of 2017 should help you quickly decide what to get.

There are some games that aren’t created for children. You can figure what titles are the most appropriate for your offspring, but we’ll generally break down our picks for gaming consoles by age appropriateness. The most impressive games from PlayStation 4 and Xbox One S are adult oriented and conveniently come with warning labels. They are just like the ones placed on movies, which most people ignore. That said, there are titles like Lego series of games like LEGO Batman 3, and LEGO The Hobbit that you should have no worries about.

The new hybrid Nintendo Switch allows players to have a traditional console experience or go portable. It’s a neat idea. But the $299 price has given some pause to potential buyers. At the moment, there is a limited catalog of games. And in the long run, it remains unclear whether the roughly 48 game developers committed to producing Nintendo Switch games will innovate, or lean on nostalgia with another Mario or Zelda themed game.

After watching demos for Nintendo Switch, the portable console has a 6.2 inch screen with 720p. When the portable console runs on battery power, the clock speed is about half of when it’s docked and connected to a TV. It’s unclear at this point whether that could make a performance difference on certain games. Also unclear is the battery life on the portable console. Nintendo puts it between 2 ½ to 6 hours. The Switch can use a battery backup or charger because it has USB type C.

There is one thing that Nintendo Switch

has in common with our top pick, NVIDIA SHEILD TV

. Nintendo has put the Tegra X1 SoC, which was used in the previous version of SHIELD TV.

What is a better game console? PlayStation 4 Pro or Xbox One S?

Sony and Microsoft create the two juggernauts of the game console universe. Both companies released in 2016 an upgraded version of their consoles from a few years ago.

is an upgraded version of the PlayStation 4, which has sold roughly 40 million units worldwide. The key upgrades with the PS4 Pro come down the graphics. Anyone who buys this console and owns a 4K TV will notice a higher contrast and much deeper colors that will add flutters of realism into the picture. PS4 Pro is designed for 4K TVs with High Dynamic Range (HDR). In a way, the PS4 Pro is ahead of its time because the games that will make the most of the Pro’s new hardware have yet to be created.

The PS4 Pro is also the console that will bring a noticeable difference to PlayStation VR, which is sold separately. Many fans of PlayStation Vue have been wondering whether the PS4 Pro can improve the quality of their picture.

The answer is simply no.

PlayStation Vue has a feed of 720p. Will that change in the future? Hard to say. At the moment, PS4 Pro can be used to stream 4K/HDR quality from platforms like Netflix and YouTube. There will likely be more 4K content from such platforms in 2017.

PS4 Pro has an eight-core CPU, a 4.2-teraflop AMD Polaris GPU, which is twice as fast as the original PS4. There’s also 8GB of RAM and a 1TB hard drive. Like the PS4 Slim, the Pro has 5GHz WiFi.

Check out this list of top selling PS4 games that are the top selling ones on Amazon to get a better idea of what’s currently being offered. There are a couple of good reasons to buy a PS4 Pro. PlayStation is known for a large roster of exclusive games. While you’ll see some of major titles being offered of NVIDIA SHIELD TV this year, Sony has been wise to maintain a robust catalog of games that you can only play on PlayStation.

. It’s designed for 4K gameplay, and comes in models that have a 1TB or 2TB internal hard drive. Like PS4 Pro, you can stream 4K content from platforms like Netflix and Amazon. Games designed specifically with 4K/HRD in mind have yet to be developed. Gears of War 4, and Forza Horizon 3 are among the few games on the market that feature HDR graphics.

If price is a major consideration, then Xbox One S is probably what you will want to buy. The PS4 Pro costs $399 and it just hit the market this month. The Xbox One S is about $100 less, freeing up your money to be saved or spent on other things — like a new game! If you do buy an Xbox One S, a bundle will give you the best value overall because you are getting a primo game included with your console. Gears of War 4, Battlefield 1 and Minecraft are among the top Xbox One bundles out there. You will need an extension that’s sold separately to use Kinect.

What games are backwards compatible on Xbox One S?

Microsoft deserves a lot credit for making a large number of Xbox 360 games compatible with the Xbox One consoles. Sony essentially expects consumers to drop $400 on a new console and subscribe to their PlayStation Now service in order to tap into its library of PS3 and PS2 games. There are also some re-mastered versions of these older games that are neat to see on PlayStation Now. But it provides little solace if you’re staring at a tall stack of last-gen games your closet.

What is the ‘Play Anywhere’ feature on Xbox One S?

Microsoft has done something really clever with its exclusive game titles that will encourage people to use Windows 10. If you buy a game like Gears of War 4 for Xbox One, you will also get a copy that will work on your PC. That’s a pretty neat feature for a gamer who might be on the road a lot for work, but has a laptop with them.

The Xbox One S comes with a built-in Ultra HD Blu-Ray player. PS4 Pro, surprisingly, does not. This might not be a big deal for you at moment unless you own an Ultra HD television, which gives you 4K resolution. But it may be something to consider if you plan on buying a new television in the next couple of years. The Ultra HD resolution is roughly four times greater than a regular Blu-Ray movie or show. Platforms such as Netflix, Amazon Prime and YouTube are already offering some streaming content in 4K.

You’re not going to find the entertainment options of playing DVDs or streaming Netflix on a Wii U. But you will get a bunch of games that won’t have you worried about whether your child is plugged into the equivalent of an R-rated movie.

Super Mario Bros., Minecraft and The Legend of Zelda: The Wind Walker are among kid-friendly options that Nintendo has had us playing for years. There were some reports of Wii U becoming in short supply because Nintento is focused on the release of its Switch console.

But you can still find Nintendo Wii on sites like Amazon. If you do scoop up a Wii U, it’s worth getting a bundled console. The Mario Kart 8 – Deluxe Set comes with the game pre-installed. Nintendo also has a Super Mario 3D World Bundle.

The console has built in WiFi and outlets for USB and HDMI, so the hookup is a pretty easy one to deal with.

If you’re looking for a scaled down version of the Wii U, the Nintendo 3DS XL Special Edition plays all Nintendo DS games. Mario Kart 7, Super Mario Bros. 2 and LEGO Jurassic World are among the most popular games.

Rating them from strictly a dollar vs value perspective, NVIDIA SHIELD TV

at the moment is offering the most potential value at the best price. I included the caveat of potential because NVIDIA SPOT has yet to be released. But at the moment, it’s fair to say that you could buy a NVIDIA SHIELD TV right now and beat all potential competitors because of its triple threat of high-end gaming, 4KHDR streaming and Google Voice Search. With NVIDIA SHIELD TV now being able to stream 4K content from Amazon, Netflix and other platforms, it has distinguished itself from pricier game consoles. And you can stream cable bundles over the Internet like PlayStation Vue or Sling TV.

or Xbox One S

is my second choice. It’s a solid investment for its potential for high-end gaming, backwards compatibility and an Ultra HD Blu-Ray player.

The unique and dazzling game catalog of PlayStation 4

can’t be denied, but it’s uncertain whether its possibilities with 4K gaming and VR will live up to expectations this year. For more on the NVIDIA Shield TV, ready my comprehensive review of how it delivers free live TV from your antenna, and serves as a DVR with a Plex Media Server.