What is SelectTV? It’s free TV on the Internet

For cord cutters who primarily use their computer to stream TV content, SelectTV

Sure, you can go to the Comedy Central web site and hunt down all 8 episode of Kevin Hart’s show, Hart of the City.

But how much time do you want to burn doing that? And how many of us will remember offhand that USA Network maintains a robust lineup of shows on the web – like Season 2 of Mr. Robot – while the Spike channel online is only good for some mental Twinkie of a show like Cops?

On a Wednesday night, after a crappy day of work, you will not want to perform this mental exercise as you plunk down onto your living room couch. SelectTV is counting on it. 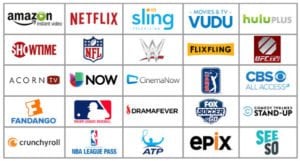 But it’s more complicated than that. The originators of FreeCast are also making the case that they can Google free TV found over the Internet better and faster than you can. By pulling together and organizing millions of movies and TV shows, SelectTV wants you to get down to the dirty business of surfing and streaming.

Go to the On-demand section, and you can peruse subcategories. There’s Primetime, Web and Kids, and Movies. There are also sections for Music, Events and Games.

Under Channels, there are live TV options that could make an avid antenna user green with envy. CNN, MSNBC and CBSN all stream live news coverage. Channels like Animal Planet, Bloomberg Television and The Weather Channel are there too.

If you subscribe to Hulu, Sling TV or Netflix, SelectTV will add all of its shows and movies to the menu. You just need to sign and authenticate your subscriptions.

SelectTV has an app for Android devices and for iPads or iPhones. You can cast shows and movies to your television using Chromecast. Or you can run a HDMI cable from your desktop or laptop to your television. But there’s no support for Roku or Amazon Fire TV streaming devices.

won’t remember your favorites or interests. It’s not a service where you can DVR shows you love on premium cable channels like AMC. For that, you’ll need something more akin to a PlayStation Vue subscription on a Fire TV

For some, SelectTV will seem like the Jitterbug phone of streaming. And that’s a somewhat valid criticism considering its premise is an improved version of Rabbit TV without the USB stick. But CNET’s Rick Broida, who writes the Cheapskate column, seemed to really like it in his review earlier this year.

Every cord cutter has different needs. If you’re someone living in a Chomecast centered world, you might like having SelectTV as your concierge of free TV over the Internet. For people who have a computer always hooked up to a television, SelectTV’s menu may also be a welcome option.

It’s hard to recommend SelectTV over buying a Roku streaming stick or Fire TV streaming stick for practically the same money. The cost of buying either streaming stick these days is minimal. For just under $30, a Roku Express can give you access to thousands of hours of programming. Same thing is true for an Amazon Fire Stick

with voice control at about $35.

Not everybody wants (or needs) a streaming device to get what they want out of their TV. While writing this review, I admit that I was surprised to see that all 12 episodes of Season 2 for Mr. Robot are still on the USA channel’s site. Completely free. (Season 1? Not so much.)

Cord cutting, or rather what substitutes as a traditional cable package, comes in many forms. With the rise of lesser known app-based streaming platforms like Sundance Now and Shudder, viewers are getting something closer to an a la carte TV menu.

is clearly trying to aim itself as a certain demographic, one that probably never wanted or needed cable to begin with.

DirecTV Now is aiming for those same 20 million potential consumers, spending a lot more money and owning a lot more assets. And they’re offering a very different product. Which is better? Who will succeed in capturing that elusive, but possibly lucrative demographic? It’s anybody’s guess.