How to get a cheaper Internet bill

High-priced Internet plans often stop many people who were considering joining the tribes of cord cutters around the nation. With a pricey Internet-only plan and little competition, it’s simply way too hard to make the numbers work and really save money. If you live in an area with overpriced Internet, you might want to consider your options of sharing WiFi.

Cable companies want to be the only game in town when it comes to TV consumption. So they have an incentive to keep Internet-only plans priced restrictively high.

But there may be a way for you to save hundreds of dollars a year on Internet. By doing so, you could become a cord cutter, get rid of cable once and for all, and bank some cash. Let’s call it Fi-Sharing.

What kind of gear can lower my Internet bill?

The idea of sharing WiFi is nothing new. You can read pieces all over the web about the pros and cons of sharing your Internet. Some articles date back to ten years ago or more.

But things have changed in the few years when it comes to tech and cord cutting.

With the rise of DirecTV Now, fuboTV, Sling TV, or PlayStation Vue, there have never been more options to replace a pricey cable plan. There have never been more choices for hardware as well, including high performance routers, WiFi extenders and wireless access points. Before we get into that, it’s worth noting where consumers stand in the fight for affordable broadband in the United States.

Unless you’re a news geek like me, checking out Congressional hearings on C-SPAN and reading industry news, you might not know a lot about the fight for affordable broadband. I read as much as I can and I still don’t know that much.

What I do know is that cable and telecom companies are fighting (with some success) low-cost municipal broadband. How? By outlawing it, of course. Meanwhile cable companies plan to continue fighting the government’s recent victory on net neutrality rules. Oh, and it’s probably worth mentioning that cable and telecom giants are free to donate to reelection members of Congress.

It’s kind of shocking to watch how some of these jokers act while influencing policies that affect you and me. I take some solace that some in Congress are actually doing the people’s business. A Congressional investigation this year exposed how cable employees are trained to create fear and doubt in customers when they want to switch to competitors or change their plans. Cable has vowed it change its ways. That’ll happen, right?

The good news is that there are groups like the Electronic Frontier Foundation that have their own ideas about competition. They’re looking out for the little guy with a small wallet. (Pssst…that’s us.) If you’re interested more about this topic, you might want to check out what’s happening with Community Broadband Networks and the Coalition for Local Internet Choice.

There’s an old saying “there’s more than one way to skin a cat.” And that’s kind of disgusting. I mean, who really skins cats? Maybe that groovy Maine dude Seba Smith had a point though way back in 1854 when he wrote that line in “Way down East; or, Portraitures of Yankee Life”, especially when you consider the full quote:

So let’s say there’s two approaches here to sharing Wi-Fi. We’ll call one the Urban Method, designed for a couple of abutting apartments or townhouses. Our second way is the Suburban Method, which will be more for a neighborhood-type of situation involving a few homes.

Our method is going to have a slight variation.

By pairing a powerful router with an equally powerful WiFi extender, you can have a strong enough signal to stream between two neighboring apartments. This simple one-two punch should be able to serve two families wanting to stream video and watch movies.

Netflix recommends at least 5 Megabits per second for HD quality video. If you’re dealing with broadband caps, then there are tips to follow for tracking and even cutting back on your usage.

How to keep a WiFi network secure

Having a guest network allows you to share a Wi-Fi signal without exposing what you want to keep private on your network.

In other words, you’re giving others access to the Internet, but not to your devices. Your home network, which could include other computers, or a Network Attached Storage remains protected. Just as important, anything that your guest downloads will not wind up on your home network.

You can get far more control over how your router is set up with what’s known as a “virtual interface”.

A word of caution first: you should really know what you’re doing if you mess with your router firmware. Bricking your $100 router is no parade. Open-source firmware like DD-WRT or its best alternative Tomato can help you create what’s known as a “virtual interface”. That can open some powerful, highly customized features on your router.

How to enable filtering options on a WiFi network

Turn on guest networking, and use a unique password that IS NOT like the passwords you use for other accounts. I shouldn’t have to say this, but I’m saying it. Often when people talk about sharing WiFi, it comes with some concerns, and rightly so. You’re worried about neighbors or some stranger downloading shady and illegal content.

You can use filtering tools already available on your router. You can also try out OpenDNS to for its content-filtering options.

With OpenDNS, you can take some countermeasures to protect yourself. Lifehacker wrote a handy guide a while back on how to set up your home network like a coffee shop that’s worth a read.

Let’s say you live in a neighborhood where you and a few neighbors are friends, and you want to pool your WiFi resources. Using wireless outdoor Wi-Fi access points, you can share a connection across very far distances.

These devices are also used to set up WiFi for campuses, parks and industrial parks. One of the key things, however, is that you need a clear line of sight between the two devices. You also need to mount these devices on a pole. Listen up. I’m talking about a pole. Not a wall. Not a chimney.

The set up for wireless access points is more complicated than setting up a guest network. You should be prepared to familiarize yourself with how to manually set the IP address of a computer and how to perform a spectrum analysis. TP-Link provides an excellent installation manual and user guide that can help you decide whether you want to try this out. There’s also a pretty decent video below. 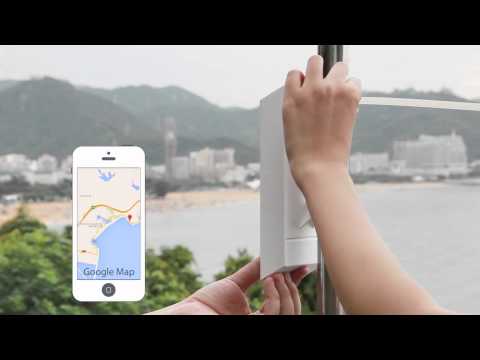 You might also want to consider using an antenna to either receive or transmit an Internet feed from a far distance. If you combine the antenna with access point device, then you can tap into the nearby coffee shop or public library offering an open WiFi connection. Like the access point, the antenna has to be positioned so that it’s pointing toward the area where you either want to receive or transmit your signal.

If you’re already sharing a WiFi connection, or transmitting it across your property, share your stories with others in the comments below.

(DISCLAIMER: This is for informational and educational purposes only. Check the terms of service of your local cable provider about whether sharing your WiFi signal would be a violation of the terms of service. This article is not advocating or promoting the breaking of any local laws.)

Want the latest news and analysis from the worlds of cord cutting, politics and tech reviews? Check us out on Facebook and Twitter and check out the Cord Cutting 2017 guide if you are thinking of cutting the cord.